If 23-year-old Gooding, Idaho resident Kelsey Osborne is sent to prison for using medicinal cannabis to treat her daughter’s seizures, Governor Butch Otter should immediately grant her a pardon. If he fails to do so, he should be dragged into a public square in Boise and horsewhipped.

Madyson Osborne, Kelsey’s young daughter, has suffered from seizure-like symptoms since she was 18 months old. Doctors prescribed Risperidone for the child’s condition, despite its serious potential side effects. On October 4, Madyson suffered an unusually severe fit that involved vomiting and disruptive behavior her mother had not previously seen.

Desperate to obtain relief for her child, and understandably concerned about the cumulative effect of the dangerous antipsychotic drug she had been taking, Kelsey made the girl a smoothie with marijuana butter – which immediately calmed her down and helped her get to sleep. During a medical appointment the following day, Madyson tested positive for marijuana. At this point, the doctor – acting as an agent of the state, rather than a physician bound by Hippocratic ethics to protect his patients – contacted the Idaho Department of Health and Welfare, which seized Kelsey’s children.

The mother now faces a charge of inflicting “injury on a child” by substituting a healthy but officially banned treatment for a toxic pharmaceutical product that has been approved by the state. Since this happened in Idaho, a felony drug charge will almost certainly be imposed as well. 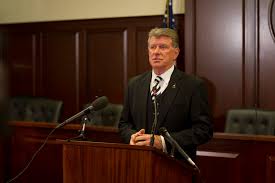 Last year, acting on behalf of the pharmaceutical cartel, Idaho’s Republican Governor Butch Otter vetoed a measure that would not have decriminalized the use of medicinal marijuana but would have allowed parents a positive legal defense of necessity if they are charged with an offense for using medicinal cannabis to treat children suffering from seizures.  At the same time, Otter issued an executive order allowing a tiny number of families to participate in an officially sanctioned test project using a marijuana-derived product offered by a government-licensed pharmaceutical company. What this means, of course, is that providing medicinal cannabis to a child is only a “crime” if this is done in a way that circumvents state-approved gatekeepers.

If Kelsey Osborne were able to use the defense offered by the bill Otter vetoed, it’s profoundly doubtful that the Jerome County Prosecutor’s Office would bother pursuing the case.

Owing to the corrupt entente between the pharmaceutical cartel and the state’s prohibitionist Pharisees, Idaho is burdened with anti-marijuana laws worthy of Saudi Arabia. The irony of this situation is lost on the full-time “creeping Sharia” alarmists who canker the Gem State, the sort of people who are reliably deaf and blind to most varieties of native-grown authoritarian sanctimony. Such people irrigate their skivvies at the thought that somewhere in the state a woman might be wearing a hijab as a gesture of religious commitment, but they aren’t unduly troubled by the thought of children being abducted at gunpoint from a young mother who faces prison for trying to wean her daughter from a foul psychoactive drug that routinely wrecks both minds and bodies.

Six years ago, Detroit resident  Maryanne Godboldo – who, like Kelsey Osborne, is a single mother -- held off an attempt by police and “child protection” bureaucrats to abduct her teenage daughter, Ariana, so that she could be forcibly drugged with Risperidone. Godboldo, a college dance instructor, had attempted to school her daughter at home, but was eventually compelled by her financial circumstances to place the youngster in a local government school. This meant subjecting the already troubled child to the government-dictated suite of vaccinations. Shortly after receiving the injections, the girl experienced severe side-effects, including behavioral problems she hadn’t previously experienced.

In entirely predictable fashion, the government’s medical functionaries decided to add one more noxious chemical to the cocktail by prescribing Risperidone as the “remedy” for the damage caused by the injections. Within a few days, the victim began to display suicidal impulses.

Maryanne sensibly decided to withdraw her child from the local mind-laundry and take care of her at home. The so-called Child Protective Service, decreeing that this motivated, loving, and well-educated mother was “in denial,” authorized itself to kidnap the child and finish the job of destroying her mind. 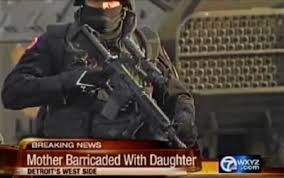 When the child snatchers came for her daughter, Maryanne — exercising the natural and plenary authority of a mother defending her child — denied them entrance to their home. Rather than obeying her lawful order to leave, the CPS contacted a SWAT team — complete with automatic weapons, armored personnel carriers, and helicopters — that laid siege to her home for ten hours.

Maryanne, who took up arms against the invaders, eventually surrendered and was charged with several felonies. All of those charges were dismissed a few months later when the Wayne County District Court ruled that the search of her home was illegal.
Seething with frustration over his thwarted desire to make an example of Godboldo, the DA tried to revive those charges in 2014. On July 12 of that year they were finally, and definitively, dismissed.

“In the end, it is a basic human right for parents to choose if they want to medicate their children,” observes Godboldo’s attorney, Allison Folmar. “When the state steps in and says `hey, mom and dad, we know what’s better for your child,’ that’s wrong.”


Significantly, an appeals court that heard Godboldo’s case acknowledged that citizens in “imminent danger” as a result of illegal police action have the right to use lethal force in protection of their homes. The true purpose of the right invoked in the Second Amendment, after all, is to protect one’s self and one’s family from the criminal violence of those who claim to rule us.


If Idaho were the state it pretends to be, its residents would not permit its government to punish Kelsey Osborne for choosing a safe and healthy treatment regimen for her daughter’s seizures – and they would not allow Governor Otter to escape accountability for the harm he has inflicted on that family, and many others, in the service of the pharmaceutical-prohibitionist axis.


This essay has also been published at the newly inaugurated website of The Libertarian Institute -- which is where you will also find the archives of the weekly Freedom Zealot Podcast. Please check it out -- and tell your friends!

Great article proving once again what your excellent writings have demonstrated so ably and so often: Government cannot be reformed, it can only be abolished. Now there are many explanations on the internet as to why careerist bureaucrat Harry Anslinger sought to criminalize marijuana: One is that the alcohol Prohibition bureaucracy at the Treasury Department was being forced out of business by the 21st Amendment and Anslinger sought to transform and rebrand his bureaucratic fiefdom as anti marijuana. A second argues that Anslinger feared jazz music was corrupting white youth and since the black musicians who created jazz stoked their musical creativity by using marijuana, Anslinger reasoned that shutting off the marijuana supply would shut down the production of jazz. A third quotes Anslinger as saying "....Reefer makes darkies think they're as good as white men." The third one is most fascinating and admits of analysis. Anslinger is, willy nilly, conceding the fact that it is government itself which sees itself as having the obligation to both impress on blacks the understanding of themselves as subhuman and at the same time monitor blacks for signs blacks are throwing off, rejecting, or calling into question the assignment of such subhuman status. Marijuana is a threat for Anslinger to the extent that it enables blacks to gain a consciousness of their government assigned and government enforced status as subhuman. It is only in the late 1960s when overt racist policy became a problem for the political class in the US, and one need only think of the riots in Newark and Watts and Detroit, that the justification for criminalizing marijuana had to be reworked and revised along medical rather than racial lines.

"...providing medicinal cannabis to a child is only a “crime” if this is done in a way that circumvents state-approved gatekeepers."


"If Idaho were the state it pretends to be..."

power and hypocrisy: the 'attributes' of the modern state, regardless of the level of 'govt' one views.

These crimes by government thugs are so extreme that I'm coming around to the conclusion that being "horsewhipped" isn't sufficient punishment. It seems more appropriate that they be shot on sight. After a few are left lying in a pool of blood, perhaps the rest would see the light and stop trying to run everyone's lives. If not, let them join the queue and take their turns.

During a medical appointment the following day, Madyson tested positive for marijuana. At this point, the doctor – acting as an agent of the state, rather than a physician bound by Hippocratic ethics to protect his patients – contacted the Idaho Department of Health and Welfare, which seized Kelsey’s children.

Big, BIG mistake on Miss Osborne's part. Anyone who values both freedom and the sanctity and health of their own body (or those of their loved ones) should know by now that these state-sanctioned drug and death dealers are a de facto arm of the Polizeistaat and are to be avoided accordingly except in all but the most dire of emergencies (and even then with trepidation and reluctance).

Natural healing homeopathic practitioners are a growing (if still largely underground) profession who should be getting much more attention and business than they are. For anyone in Kelsey Osborne's situation, these are the people who offer the best hope of treating what ails them or their children without risking death at the hands of the Pharmaceutical-Industrial Complexes licensed dealers/whores.