Can You Spare Some Tears for a Killer Cop?

That familiar action movie cliché isn’t found within the lawsuit filed by former West Valley City, Utah narcotics investigator Shaun Cowley against the department that had employed him. It does encapsulate the substance of that suit quite tidily, however.

After fatally shooting 21-year-old Danielle Williams in November 2012, Cowley was offered what amounted to a “hush money” buyout to go away quietly, according to a motion filed by Attorney Mark Geragos on behalf of the victim’s family. That department had a great deal to conceal.

An official audit prompted by the investigation into the killing found that officers in the Neighborhood Narcotics Unit stole money and drugs, took valuables as “trophies,” misplaced or destroyed evidence, misused GPS trackers and other equipment, and had made “improper use” of the pathetic people who had been blackmailed into working as “confidential informants.”

Cowley’s lawsuit confirms those allegations in detail, while depicting himself as an embattled whistleblower who had been scapegoated for the transgressions of less honorable men. By his account, from the beginning of his assignment with the NNU Cowley was disgusted by the casual corruption of his colleagues. That revulsion didn’t prompt him to quit until long after he had killed a helpless, desperate young woman as part of an NNU assignment.
Willard, a Vancouver, Washington native, had relocated to Utah to seek help overcoming a narcotics addiction. A few days before Cowley killed her, Willard had called the police to report a break-in at her temporary place of residence. This demonstrates that Willard, rather than seeking to conceal illegal activity from the police, was unwisely seeking to enlist their help. It also suggests that she was concerned about her personal safety – which would explain why she panicked when she was accosted in the parking lot by two armed strangers in stereotypical drug-dealer attire who claimed to be police officers.

As Cowley and his partner, Officer Matt Salmon, approached Willard, she locked her car and refused to roll down the window. Cowley procured a crowbar in order to shatter the driver’s side window, which did nothing to assuage Willard’s fears. She put the car in gear and attempted to flee the parking lot, backing her Subaru Forrester into a police cruiser (one account said that the damaged vehicle belonged to one of the residents) and then allegedly injuring Cowley as the car brushed against him.

Cowley, who was not seriously hurt, shot Willard twice, once in the top left-hand section of her head. When he fired, Cowley was standing beside the car, rather than in front of it. The investigation by Salt Lake County DA Sim Gill concluded that at the time Cowley fired the shots, Willard was not driving fast enough to endanger the officer’s life, or that of his partner, who also fired several shots without hitting Willard.

The official inquiry into the Willard killing led to the dismissal of 125 drug-related criminal cases built by the WVPD and the temporary abolition of the NNU. Amid gathering public outrage and accumulating discoveries of institutional corruption within the department, Chief Thayle Nielsen suddenly retired, citing a previously undisclosed “health” issue. Cowley was compelled to resign on financially favorable terms -- not for killing Willard, but for “misplacing” drug evidence that was found in the trunk of his car.

Salt Lake County District Attorney Sim Gill ruled that the shooting was “unjustified,” and indicted Cowley for manslaughter. With the timely and valuable help of former federal prosecutor Paul Cassell – whose record suggests a thoroughgoing hostility toward due process for any suspect who is not a law enforcement officer – Cowley was able to get the charge dismissed, and was reinstated in his old job. Within a few days, however, Cowley resigned, insisting that the “hostile work environment” made it impossible for him to continue with the department.

After working as a shakedown specialist and de facto hitman for the West Valley PD, Cowley now claims to be among its victims. Once the rind of self-serving rhetoric is peeled away from Cowley’s lawsuit, we can find some very useful disclosures regarding the privileged criminal clique from which he once drew a paycheck.

Six months after Cowley was assigned to the NNU, the unit received a federal grant through the DEA for its investigation into the disappearance of Susan Powell – a lurid unsolved case with no demonstrated connection to drug trafficking. On the basis of Cowley’s lawsuit it appears that the DEA grant was used to fund the NNU’s other activities, which – in his words -- involved routine violations of “constitutional rights and proper police procedure.”

As Cowley relates the story, in early 2012, he confronted his supervisor, Lieutenant John Coyle, about an illegal search and unlawful seizure of “a large amount of US currency inside the closed drawers of a tool chest” found in a domicile. “Coyle ordered Cowley to be quiet or face punishment for insubordination,” the lawsuit alleges. “Cowley shortly thereafter asked to be transferred from the NNU but was denied a transfer.”

Narcotics enforcement in a low-income, white-minority suburb of Salt Lake City was more lucrative than other assignments that might actually involve the protection of persons and property. Cowley, like other NNU officers, found himself so busy building petty drug cases that he didn’t have time to follow long-established procedures. This meant that he often kept evidence in personal lockers before booking it.

After the Willard killing, the department began an internal audit of the NNU’s evidence. As part of the investigation, Lt. Coyle and an underling “cut the lock on Cowley’s locker and destroyed all the evidence present in the locker,” the suit asserts. “Coyle made no inventory nor kept any record of the locker search.” In similar fashion, Cowley testifies, Coyle ordered officers to destroy the cell phones they had seized from citizens and claimed as “trophies of past investigations.”

Like his comrades in the NNU, Cowley didn’t receive any task-specific training before being deployed as a prohibition enforcement specialist. Once the NNU audit began, however, “Coyle fabricated a training manual as evidence that NNU officers received drug enforcement training…. Coyle then attempt to provide the manual as evidence of NNY training to FBI agent Todd Palmer.”
Coyle, who should have been prosecuted, was temporarily demoted and given a $20,000 salary cut   -- and then fully reinstated a few months later by the civil service commission.

The most impassioned sections of Cowley’s lawsuit describe his sense of betrayal over being held accountable for the killing of Dannielle Willard. After he was placed on paid vacation, Cowley was visited by then-Chief Nielsen, who promised that the department was going “to stick this case up Gill’s ass.” At the time, the suit explains, Nielsen and DA Sim Gill “were in the midst of a feud following past WVPD misconduct.”

Cowley believes – with some justification – that a strategic decision was made to treat him as expendable, even as the WVPD and its allies worked to undermine the prosecution in the manslaughter case.

During his employment hearings, Cowley claims, “WVPD intentionally hid evidence and documents from Cowley’s counsel that was discovered by Cowley’s counsel and the ALJ [Administrative Law Judge].” That evidence wasn’t related to the Willard shooting, but Cowley’s mishandling of evidence from drug cases. This eventually led to the loss of Cowley’s job, something he considers a monumentally graver injustice than the killing of Danielle Willard.

Cowley has sued the department and the city for violating his “expectation of privacy” at work, conducting an “unlawful search and seizure,” and depriving him of “his proprietary right to employment.” He has also sued the department for “malicious prosecution” for manslaughter, and DA Sim Gill for “defamation” for publicly describing the shooting as “unjustified.”

The WVPD “fabricated evidence, withheld evidence … tampered with witnesses, and influenced the Hearing Officer in an attempt to terminate Cowley,” declares the civil complaint. By doing so it “deprived Cowley of his constitutional right to a fair proceeding prior to deprival of his employment. As a direct and proximate result … Cowley has suffered severe and substantial damages.”

All of this was done, Cowley wants the public to believe, to extinguish a lonely beacon of decency amid the gathering gloom of pervasive corruption at the WVPD.

There is at least one other active lawsuit against West Valley City and its police department that offers a parallel account of the department’s depraved customs and practices. As it happens, Cowley plays a key role in that suit as well – as a defendant, rather than a plaintiff.

On August 12, 2012 – just weeks before Cowley killed Danielle Willard – he and his partner, Kevin Salmon, and several other NNU officers invaded the home of Danielle Swasey and Dante Ketchens. For more than eight hours, the couple was handcuffed and unable to care for their children, an infant referred to in the suit as “D.S.” and a juvenile identified as “D.K.” After rummaging through the home without a warrant or the owner’s consent, Cowley and his comrades made themselves at home, eating pizza, playing video games and “mock[ing] Swasey and the children.”

“After searching the home, the Officers forged Ketchens’s signature on a consent to search form in order to obtain a search warrant for the home,” the lawsuit recounts. “Ketchens was arrested after officers allegedly found illegal drugs in the home during the search. He was released 72 hours later.” No charges were ever brought against him. 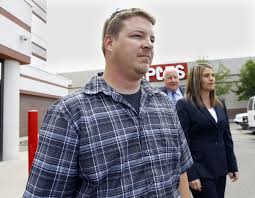 By filing his own lawsuit, Cowley has unwittingly validated the allegations made against him and his comrades by Ms. Swasey and her family. Their lawsuit also offers an invaluable glimpse of Cowley’s conduct and attitude practically on the eve of the Danielle Willard killing. His behavior was that of an opportunistic thug, not a whistleblower burdened with a tormented conscience.

Cowley’s behavior has already cost a great deal to the tax victims residing within West Valley City, who should be nauseated by the spectacle of a killer cop seeking a subsidized pay-out to palliate his hurt feelings.

Though he is consummately repellent otherwise, Cowley has performed a worthy public service. By documenting how our supposed protectors treat each other when institutional self-preservation is at stake, Cowley has enlarged the already plentiful supply of reasons for decent people to avoid having anything to do with the police – thereby enriching the already compelling case for abolishing government law enforcement.

This week's Freedom Zealot Podcast (now available on Stitcher!) deals with the Regime's effort to round up and punish the patriots who defied the BLM at Bunkerville:

This situation of events has been played out many, many times before. The only difference between this one and the thousands of other events just like this one, as reported in the blog. Is the cops and victims named are different and the location is different, but the foundation is the same. Criminals at work.