Makaela Zabael-Gravatt was shot and nearly killed in her own backyard in Meridian, Idaho last September. The man arrested in that attack, Christopher Wirfs, had a violent criminal history. Prior to the attempted murder, Wirfs had spent several weeks stalking and harassing his victim, on multiple occasions explicitly threatening to shoot her.

Zabael-Gravatt twice requested, and was denied, an order of protection against the man who eventually tried to kill her. Media inquiries about those denials were deflected by the Meridian Police Department to the Ada County Prosecutor’s Office, which simply refused to comment on the matter.

At the time, the Meridian PD and the Ada County DA were preoccupied with a much more urgent matter than protecting a desperate, frightened mother who faced an immediate threat on her life from a violent criminal. They were sheltering a Meridian police officer whose feelings had been hurt by a confrontational Facebook post.
In March of last year, the Ada County Prosecutor’s Office requested, and immediately received, a no-contact order banning Meridian resident Matthew Townsend from coming within 100 feet of the paling, timid creature known as Corporal Richard Brockbank of the Meridian PD. Townsend had been arrested by Brockbank a few weeks earlier without legal cause and justification.

On the eve of his preliminary hearing on a spurious charge of “resisting and obstructing” (he was not under arrest, nor had a charge been made against him, at the time of his supposed resistance), Townsend published a brusque but inoffensive post on Facebook.

In that cyber-missive, Townsend said, in essence:

If, in defiance of all reasonable expectations, Officer Brockbank testifies truthfully, the charge against me should be dismissed. If this doesn’t happen, I will exercise my constitutionally protected right to protest the abusive actions of the Meridian municipal government and its agents, including Officer Brockbank.

When he showed up at the hearing the following day, Townsend learned that the Meridian City Prosecutor intended to have him arrested on a felony charge of  “witness intimidation.” District Judge James Cawthon, after examining the Facebook post in question, concluded that Townsend’s statement did not constitute a threat but offered the prosecution a chance to convince him otherwise in a hearing scheduled to take place place eleven days later.

Illegally defying Judge Cawthon’s court order, the Ada County Prosecutor’s office soughtan arrest warrant from another judge on the following day – carefully withholding the fact that Cawthon had already made a finding of fact and had scheduled an adversary proceeding on the matter. Townsend was arrested late that night -- a Friday – and would have spent the weekend in jail had his mother not arranged, on sacrificial terms, to pay his bond.

Unlike Wirfs, who made specific and repeated threats against Mrs. Zabael-Gravatt, Townsend explicitly and repeatedly foreswore violent or criminal behavior and never threatened anybody in any fashion. According to domestic violence counselor Jeannie Strohmeyer, the likeliest explanation for the denial of Zabael-Gravatt’s request for a protective order was that there was no “domestic relationship” between her and the aggressor, and she wasn’t able to cite an incident of physical harm – including “false imprisonment.”

Ironically, while it is certainly true that Townsend was not in a domestic relationship with Officer Brockbank, there was a history of violence between them, specifically false imprisonment. In this case, however, it was the perpetrator of the criminal violence who immediately received an order of protection, owing entirely to his privileged status under what we are supposed to pretend is the law.

In the service of the official fiction that Townsend’s rhetoric victimized a member of the state’s punitive priesthood, Ada County Deputy Prosecuting Attorney James Vogt composed two motions that suppurate sophistry. In one, an objection to a defense motion to dismiss, Vogt insisted that by criticizing Officer Brockbank on Facebook, Townsend had committed an act directly comparable to a cross-burning carried out by the Ku Klux Klan.
Vogt’s other exercise in Olympic-caliber dishonesty was an objection to a defense Motion in Limine. Since Townsend’s statement was a form of political dissent, that motion contended, it is protected by the First Amendment and cannot be construed as a criminal act, so it shouldn’t even be entered into evidence.

Proving that it is possible to simper in print, Vogt wrote that Townsend’s statement that he was prepared to conduct non-violent, legal protests in Brockbank’s neighborhood constituted a “true threat” – owing to the alleged “war on police.” The fact that the post tagged several of the officer’s family members (in addition to scores of other people – including your present correspondent and every media outlet in the Treasure Valley) was artfully misrepresented as a collateral threat to Brockbank’s family. Through the alchemy of Orwellian inversion, Townsend’s acknowledgement that everything government does contains an implied threat of lethal violence was repurposed into a supposed threat to use violence against the State and its agents.

“Given the current political/cultural climate, Mr. Townsend’s message … [serves] as a real and true threat,” oozed Vogt in his objection. “His words are more threatening in an era where [sic] the police are under attack from civilians, battered, and killed in the line of duty.”
That sample of special pleading was supplemented by a footnote citing four news accounts of police being injured or killed. Two of them described minor injuries suffered by officers in the course of their not-exceptionally-dangerous jobs. Two others were high-profile stories of supposed martyrs in the so-called “war on police”: Lt. Joe Gliniewicz of Fox Lake, Illinois, and Deputy Darren Goforth of Harris County, Texas. Both died as a result of what the public was told were anti-police assassinations, and honored with the familiar Soviet-grade state funeral and saturation media coverage.

Both of them, as it happens, were degenerate frauds.

Gliniewicz committed suicide after embezzling from a Police Explorer unit he led – and inquiring into the possibility of a contract hit on a local official who was investigating the theft. His corruption and long record of abusive behavior (including death threats against a civilian female employee of the department) were well-known by the officers and administrators who presided over a funeral that beatified him as a saintly defender of the public weal.

After Deputy Goforth was gunned down by a mentally ill man at a gas station last August 28, Harris County Sheriff Ron Hickman – speaking without a particle of evidence to sustain his conclusions – blamed the crime on critics of law enforcement: “This rhetoric has gotten out of control, to the point where calculated, cold-blooded assassination of police officers happens.” 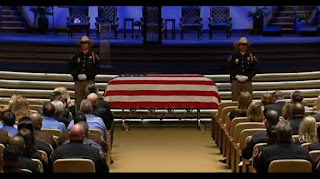 Shannon Miles, the thirty-one-year-old African-American man who shot Deputy Goforth fifteen times, has been repeatedly hospitalized for severe mental illness. His derangement is so severe that his defense attorneys cannot hold a coherent conversation with him. The only “rhetoric” that played a role in his eruption of criminal violence would be the voices in his head, not any he may have heard in the media.

Just as importantly, Deputy Goforth wasn’t engaged in official duties when he was fatally shot: He was en route to a motel with his mistress, a “Badge Bunny” who had been used as a pass-around toy by at least three members of the Harris County Sheriff’s Office. Goforth found himself in the path of Miles’s lethal derangement because he was in the wrong place, at the wrong time, in the wrong company, with the wrong intentions. He wasn’t upholding the law, but engaged in the ongoing betrayal of his wife and children.

Granted, the details about those cases weren’t widely known when Vogt cited them in his motion. If they had been, the truth wouldn’t have mattered. In its persecution of Matthew Townsend, the Ada County Prosecutor’s Office has proven itself an infinitely self-replenishing Artesian well of falsehoods. They know that the case is without merit, and that if they are able (with the eager help of a deeply prejudiced trial judge) to wring a conviction out of a jury, their victory wouldn’t survive an appeal. Their strategy, from the moment this case began, was the same as that of every other prosecutor in our increasingly Sovietesque system: Extort a plea bargain in order to inflict punishment without winning the case on its merits.

Whatever the disposition of the Matthew Townsend Case, the Fraternal Order of Police is lobbying for legislation that would make it a federal hate crime for a citizen to violate the emotional “safe space” of one of his uniformed overseers.

An FOP-supported bill in Maryland that would likely serve as a model for federal legislation would make resisting arrest a “hate crime” owing to the identity of the supposed victim. State legislatures elsewhere are considering similar measures, and some municipal governments are enacting resolutions endorsing the FOP’s demand to swaddle police officers in federal “specially protected” status.

In a letter to President Obama, Chuck Canterbury, National President of the armed tax-feeders’ union, demanded that “the current Federal hate crimes law be expanded to include law enforcement officers. This call has gone unanswered and our nation’s law enforcement officers continue to die in the streets.”
Canterbury, like most in his chosen profession, thrives in a falsehood-rich environment, so his lie of omission – namely, that on-duty violent deaths of police officers were down in 2015 – was predictable, but duly noted for the record nonetheless.

Apparently without giving thought to what it says about the supposed valor of police officers, Canterbury demanded that cops be designated a “specially protected” group who are “hunted and targeted just because of the uniform they wear.”

Canterbury’s tales of insurgent criminals and intimidated cops segued into a demand that “hate speech” be treated as a federal offense.

“Elected officials are quick to console the families of the fallen and praise us for the difficult and dangerous work that we do every day,” sniffles the FOP commissar. “Yet, too many are silent when the hate speech floods the media with calls for violence against police or demands that police stand down and give them” – Canterbury never defines “them,” interestingly – “`room to destroy.’ The violence will not end until the rhetoric does which is why I have called on Congress and your Administration to work with us to address the surge of violence against police by expanding the Federal hate crimes law to protect police.” (Emphasis added.)

The objective here, once again, is to penalize rhetoric as a criminal act against a member of a specially protected class.  Ada County’s depraved, vindictive pursuit of Matthew Townsend demonstrates that this is possible even without the benefit of federal legislation. The “war on cops” is a malignant fiction, but the Matthew Townsend case is one of many portents of a national war by the police against their critics.

"...the emotional “safe space” of one of his uniformed overseers."

i don't even understand what that means and they want it to be a crime?

soon, it will be cheaper to print a book listing what is NOT a crime, since, or at least it seems, virtually EVERYTHING today is a 'crime'.
printing the shorter list of 'allowables' would be much cheaper.

"Cop" is most definitely a mental disorder of these inhuman animals.