Early one morning in July 2014, a woman in Myton, Utah was startled awake by an uninvited visitor named Thomas Wayne Butterfield.

“I'm a cop,” Butterfield explained to the intimidated woman when she asked how he had gotten into her bedroom. “They teach us how to do those things.”

When the woman moved into the living room, Butterfield followed her, placing his hand on her leg in a gesture at once proprietary and predatory. The unexpected arrival of the woman's father prevented what likely would have been a sexual assault – and Butterfield's firing as the tiny town's police chief ended a four-month campaign of harassment during which he forced his unwanted attentions on at least four women.

This behavior was not out of what passes for Butterfield's character: During a career that spans nearly two decades and roughly a half-dozen police agencies across Utah, he has routinely preyed upon women. This has led to numerous complaints, criminal charges, and a suspension – yet he remained employable in an occupation that selects for predators and tends to reward their misbehavior.

Salt Lake City NBC affiliate KSL reports that two days prior to Butterfield's July 2014 invasion of the unnamed woman's bedroom, the victim had called the police seeking “help getting her car, purse and other personal items back from her estranged husband.” After Butterfield arrived, the woman testified during a July 30 pre-trial hearing, the officer held her against her will for about two hours, driving her in his patrol car and making clumsy sexual overtures and ignoring her repeated pleas to be released.

“He asked me if I ever thought about having sex with a cop,” the woman related in the courtroom. Acting on the assumption that the victim's reluctance reflected concerns about confidentiality, rather than her chromosome-level revulsion, Chief Butterfield assured her that “My car is like Vegas: What happens here, stays here.”

Trapped in the custody of an armed stranger with a state-issued license to use lethal force, the woman was concerned about not only her bodily integrity, but her physical survival – and she knew that his account of the incident would be considered definitive because of his position.

“With him being in authority, he could make things a lot worse for me because he's a cop,” she observed during her testimony. 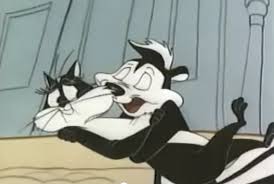 Although she escaped that encounter, Butterfield – displaying a heedless, clueless ardor reminiscent of the libidinous cartoon character Pepe LePew – materialized in her bedroom two days later.

Other women have provided sworn testimony of similar treatment by Myton's only full-time law enforcement officer.

“I told him that I wasn't interested in any sort of sexual relationship,” a second woman testified during a May 11 hearing. Rather than accepting the rebuff, Butterfield plied the victim with unsolicited personal disclosures, telling her that he and his wife hadn't been intimate for several years and that he “needed a cool kind of friend that wouldn't cause drama in his life.”

“I've told a lot of people that,” Butterfield admitted when asked about the claim that he had complained to women about intimacy issues with his wife. He described those comments as “facetious” while grudgingly conceding that such comments “may have been in poor taste.” His misconduct wasn't limited to breaches of etiquette.

Despite the utter absence of any hint of reciprocal interest, Butterfield called the woman repeatedly and showed up at her home without an invitation, announcing his intention to “finish the conversation” about sex – which, given that the “conversation” was one-sided and involuntary, left the woman understandably alarmed and frightened.

Remarkably, the Myton woman who found Butterfield standing in her bedroom was not the first to have that experience – nor the first to be told that breaking into the home of a would-be victim is part of his skill set as a police officer.

Holli Stewart told the Deseret News that after breaking up with Butterfield in 1999, she found him sitting on the edge of his bed. When she asked how he had gotten in, Butterfield replied: “Holli, I'm a cop. They teach us how to do that. I can get in anywhere.”

At the time, Butterfield was employed as an officer with the police department in Lehi, Utah. He was charged with criminal trespass, a class B misdemeanor. A plea bargain reduced that charge to an infraction in exchange for a no contest plea. His peace officer certification was suspended for a year by the Utah Peace Officer Standards and Training Council (POST).

In an interesting contrast, last year the POST Council imposed a two-year suspension on former police cadet Shawnn Hartley for “not disclosing a prior use of marijuana in a timely manner." Under the institutional priorities of the Utah POST Council, which haven't changed appreciably over the past decade and a half, a lack of candor about marijuana use is a graver offense than using the skill-set of a police officer to engage in sexually predatory behavior.

Butterfield's brief suspension, and his criminal record, did no lasting injury to his law enforcement career. In 2000 he found employment with police departments in Spring City and Roosevelt, eventually being hired as a deputy with the Duschene County Sheriff's Office.

In 2010, Butterfield resigned from the Duschene County Sheriff's Office during an internal affairs inquiry into alleged misconduct involving another woman. He was re-hired by the Roosevelt PD, but was fired in April 2013 after two women filed complaints claiming that he had acted inappropriately toward them. 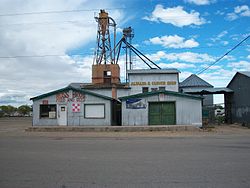 Despite his severely tainted record and “gypsy cop” status, Butterfield was hired by Myton when the political clique in charge of the town of 604 people unaccountably decided that although the town has one stop sign and no measurable criminal activity, it needed a police department.

“We scraped together every cent we could to get a department together,” Myton Mayor Kathleen Cooper lamented to the Salt Lake Tribute. Perhaps as an economy measure, the city government didn't invest in a background check. Butterfield was hired in July 2014. By September, sexual misconduct allegations had begun to accumulate.

“People are innocent until proven guilty,” Mayor Cooper said with respect to the “mind-numbing” charges against Butterfield. “At this point, we stand behind our chief, and we'll defend him until we find out otherwise.” The mayor's determination to defend the chief evaporated shortly after the September 16, 2014 interview with the Tribune: Butterfield was fired by the city and surrendered his peace officer certification.
8th District Judge Samuel Chiara found sufficient evidence to bind Butterfield over for trial on two counts of stalking, one count of illegal detention, and one count of criminal trespassing. The trial is set for early December. If Butterfield possessed even a particle of humility, or even the slightest capacity for contrition, he could have ended his legal travails on absurdly generous terms.

Originally charged with three misdemeanor counts of stalking, criminal trespass, and unlawful detention, Butterfield was offered a deal in March that would have dismissed everything but a single charge of stalking. He rejected this offer – which was incomprehensibly lenient, given his history – because the single stalking charge would have applied to three women. Butterfield apparently hopes that jurors will perceive him to be a flawed but decent police officer traduced by disreputable women. 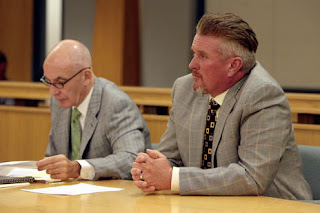 “Most of the victims have had problems with law enforcement in the past, have had some kind of history," Duchesne County sheriff's detective Monty Nay testified during an Oct. 14 hearing for one of those civil stalking cases. When Butterfield was confronted with the allegations, Detective Nay recalled, he threatened to file criminal charges and pursue civil action against the accusers.


During the same hearing, one of the women – who had a pending drug possession case -- explained that whenever her dogs bark in the middle of the night, she finds herself wondering, “is it him? I'm scared.”


Her concern about the possibility of retaliatory violence by a state-licensed predator was entirely reasonable. After all, Butterfield was a cop; he had been taught how to do such things.

this guy is, quite literally, PERFECT for a cop: bullying, bellicose, narcissistic, perverted and sociopathic, if not psychotic.

these are the 'qualities' serving as the reasons he is hired by other cops and his past becomes an asset, not a liability.

Do any of the women Butterfield victimized have husbands, fathers, sons, brothers? Why is that POS still alive?

I'm sure this guy sees himself as some type of "real ladies man" and can't imagine why any woman would want to resist his advances.

Besides, "he's a cop" and who could resist that?

"PIG" is one of the lowest occupations that a human being can hold. Lower than a child molester by far. They do not protect your rights, instead they are one of the main violators of your rights.

That Ms Cooper is a first class mayor. Too bad she can't run a bigger town.

600 people and she and her cronies 'scraped together' every un-accounted for penny to fund a police force and then hired this clown to be the big chief.

Parts of Utah are downright beautiful. Still, no one could pay me enough money to live and run a business in that Mormon hothouse of a state.

Not sure there's anyplace to be free of 'insect authority'. Just now read that North Dakota is the first state to legalize 'armed' drones for law enforcement use.

From the Daily Beast:
'Bruce Burkett of ND Peace Officer's Assoc. was allowed by the state house committee to amend HB 1328 and limit the prohibition only to lethal weapons. "Less than lethal" weapons like rubber bullets, pepper spray, tear gas, sound cannons, & tasers are therefore permitted on police drones."

Have NOT confirmed this story, but will talk to my State Reps about it.