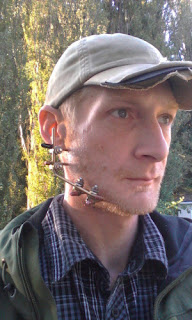 Seattle resident Nathaniel Caylor wears a large, conspicuous metal appliance on the right side of his face, a souvenir of a May 5, 2009 incident in which Seattle Police Officer Eugene Shubeck tried to murder him in front of his twenty-month-old son, Wyatt. The police had arrived in response to a third-party report that Caylor, distraught over the death of his wife, was suicidal.

Following seventeen surgeries – which included bone grafts and the insertion of metal screws and plates to hold together his shattered face – Caylor was offered $1.975 million by the City of Seattle to settle his federal lawsuit. This is believed to be the largest tax victim-supported settlement arising from police misconduct in the history of Seattle, and it prompted the predictable, petulant reaction from the local police union.

“The settlement by the City of Seattle in this case sends a disturbing message to the rank and file of the Seattle Police Department,” pouted Seattle Police Officers Guild President Ron Smith. For the public supposedly served by the local police, the more “disturbing” message is found in the fact that Shubeck remains on the Seattle PD payroll. His impregnable cloak of “qualified immunity” protects him from personal liability, and the unqualified support of the police union provides him with unassailable job security.

As punishment for being on the receiving end of Shubeck's homicide attempt, Caylor was charged with “felony harassment.” At the same time, Caylor was dealing with the seizure of his son by Child Protective Services on the basis of a perjured report by Detective Jeffrey Mudd, who falsely claimed that Caylor had used his son as a “human shield” and had threatened to kill the child.

At the time he pulled the trigger, Schubeck “had observed Mr. Caylor and his son on the balcony, and observed that the boy was in no distress,” wrote U.S. District Judge Richard A. Jones in a May 22, 2013 ruling.

Drawing on the record of stipulated facts, Judge Jones underscored several other important things that a “reasonable officer” would have known, among which are the following:

*“At no point did Mr. Caylor threaten to harm his son,” but he did express concern “that if the officers forced entry to his apartment, they would hurt his son”;

* “Mr. Caylor's son exhibited no signs of distress when Ofc. Schubeck observed him on the balcony,” and “officers heard no indications of distress from the boy when he and Mr. Caylor were inside the apartment”;

* “Mr. Caylor did not display a weapon or threaten to use a weapon”;

* “Mr. Caylor did not suggest he was attempting `suicide by cop' – instead, he asked Ofc. Schubeck if he was going to shoot him and justify the shooting as `suicide by cop'.”

In the service of Blue Privilege, the Seattle PD and its allies in the court system held disclosure of the relevant facts in abeyance in order to extort a plea from Caylor on a “cover charge.” With his son being held as a hostage and facing the monolithic dishonesty of a police force willing to protect its privileges through perjury, Caylor took an “Alford plea.” This meant that he acknowledged that there was sufficient evidence (in the form of police testimony) to convict him, but he did not admit guilt. Caylor regained custody of his son in 2011.
During oral arguments before a panel of the 9th Circuit Court of Appeals in April, Caylor's attorney, Tim Ford, described how Shubeck had created a “death trap” by ordering him to leave his house – then preparing to shoot him if he went back in, without warning him that this would happen. 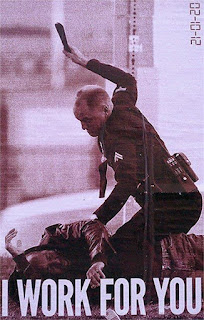 "If he comes back on the porch, I’m going to shoot him,” Shubeck told Leslie, according to subsequent sworn testimony.
"Don't miss,” Leslie replied – even though he would later insist that he was “shocked” by Shubeck's decision, and that he would not have done likewise.
Evan Bariault, Shubeck's attorney, argued – in effect – that everything that happened during the encounter was Caylor's fault because he had attracted the attention of people who had official permission to use lethal violence.
"The threat to the child represented by the circumstances of this situation –the escalation of this event by Mr. Caylor,” Bariault insisted during oral arguments in defiance of the well-established factual record to the contrary. “The entire time this was taking place that child was in harm’s way because the officers did not know, one, whether Mr. Caylor was going to harm his child, or number two, whether Mr. Caylor was going to engage in a confrontation, a firefight with officers that could also potentially harm that child.”

Bariault's suggestion that a “firefight” was possible reflects the fact that an unloaded shotgun was found in a closet after Shubeck's attempt to kill Caylor, and several officers claimed to have heard him “rack” the weapon at some point. As recognized by Judge Jones, Caylor was never seen holding the weapon, and undisputed testimony confirms that the young child was never in distress, and that Caylor never expressed an intent to harm his son. At one point, according, once again, to undisputed testimony, Caylor told the police, “Don't kick the door in … If you hurt my child, you're going to be in trouble.” 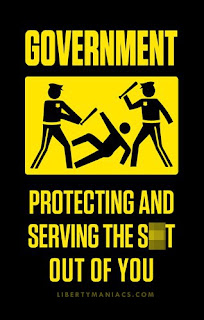 "The only way they could protect that child was by removing Nathaniel Caylor from that apartment,” Bariault maintained in the apparent belief that the child was safer in the hands of the people who had just tried to kill his father without justification.
The typically self-contradictory police account treated that expression of concern as evidence of both Caylor's “neglect” and his supposedly aggressive disposition toward the uninvited armed strangers who eventually tried to kill him.
"Where potential tragedy lies on both sides of an officer’s decision, that officer is entitled to qualified immunity,” Bariault pontificated during the oral argument. “The lawfulness of Officer Shubeck’s decisions [was] beyond debate.” This is because the “lawfulness” of an officer's actions are based on the calculus of self-justification called the “reasonable officer” standard and the officer's assessment of the “totality of circumstances” – a phrase that casually asserts a cop's situational omniscience.
In the case of Nathaniel Caylor – as in so many others involving what can reasonably be described as a murder or attempted murder by a police officer – the assailant, because of his position, was immune to scrutiny and above criticism. On the other hand, every syllable, gesture, or facial expression on the part of the victim was examined in search of evidence of negligence, culpability, or malice. For instance, the fact that the child was playing with a screwdriver and otherwise untroubled was presented as evidence of Caylor’s supposedly neglectful parenting by people who tried to redirect attention away from the fact that the grieving father was distracted at the time by two armed strangers who were prepared to kill him, and very nearly did so. 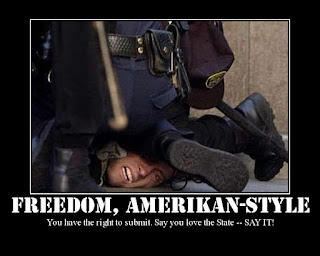 Caylor believes that the scandal-plagued Seattle PD, which is operating under a federal consent decree, “is really making positive strides” in reforming itself, even though “it's a little late in my case.” He told the Seattle Times that Wyatt, who has no memory of the day his father was nearly killed by Officer Shubeck, wants to be a police officer himself.
Astonishingly – if not inexplicably -- Caylor approves of his son's career aspirations, which will probably be revised once the youngster is old enough to understand what his would-be professional peers did to his father.

(This is an expanded version of an essay originally published at The Free Thought Project.)

If you can, please contribute to help keep Pro Libertate online. Thank you so much!

I hope Mr. Caylor gets over his Stockholm Syndrome and comes to his senses before his son grows up believing the superstition that "police officer" is an honorable choice, rather than the murderous choice it actually is.

Everyone is currently advised to keep a sock in it when dealing with immature men and women who ate the red pill and are "authorized" to run roughshod over the dramatis personae of Copworld. Be careful.. Be very careful. a no name is