"We Have Been a Paramilitary Organization": How the Police Talk When They Think We're Not Listening


“We have historically been a paramilitary organization,” observed Indianapolis Police Chief Rick Hite during a September 17 City Council meeting. “And we serve whoever sits in that chair, regardless of race, gender, creed, or political party. I don’t know what we would do if we had to go to battle, and we had to make a determination, based on past practices, whether or not we wanted to go into battle. … I am a soldier in an army. We serve you in that way…. We should not be in a position where we’re going to have to decide how we’re going to police this city.”

Hite spoke those words in a largely empty chamber, to an audience drawn entirely from Indianapolis’s political class. True, the budget meeting was open to the public, which could attend in person, monitor a live broadcast online, or watch an archived video of the proceedings later. But few, if any, city residents were likely to endure the two-and-a-half-hour-long barrage of bureaucratese that provided the prelude to Hite’s candid invocation of fuhrerprinzip – modified, in this case, to express unqualified loyalty to an oligarchy, rather than a single “leader.”
The Chief’s statement was a rejoinder to Councilor-at-Large Leroy Robinson, who had defended his vote in opposition to a $29 million tax increase to expand the ranks of Hite’s “army” by three hundred officers.

Committing the grievous offense of viewing the proposal from the perspective of the tax victims, Robinson pointed out that the city government over the past several years has spent $286 million on what he called “pet projects and development” – such as expanding the city’s entertainment industry and building new parking garages. A significant portion of that amount – an estimated $120 million a year – is diverted through the Tax Increment Financing Commission (TiF), which is an undisguised slush fund for crony capitalist ventures.

“It’s kind of unfair and disingenuous to the taxpayers of this city, [since] that public safety tax wasn’t needed,” Robinson insists. “What is needed is a permanent change in priorities…. We tend to pay for what we want, and we tax the people for what we need….For years, we’ve been gouging the taxpayers to pay for our pet projects.” That includes $150 million over the past decade to subsidize the Indiana Pacers NBA franchise, $15 million to build an auditorium, and – in one of the oddest corporatist ventures to be found in the American Midwest -- $6 million to build a Cricket field.

“The taxpayers believe that this is their money,” Robinson said, committing what must have been perceived as a civic blasphemy. “We have emotionally pleaded for a tax increase” in order to expand the police department, continued Robinson, while shaking down the tax slave population for the benefit of politically favored constituencies.

Robinson appears to be a bright and earnest young man whose mind is still captive to statist fallacies. This is why he doesn’t seem to understand that the political class will never make a priority of addressing the needs of the public from whom they wrest their subsistence. Supplying needs is the job of the market – and this emphatically includes “public security,” the provision of which is decidedly not the true mission of law enforcement.

Although Chief Hite invoked his experience as a “thirty-six-year veteran of law enforcement” in his response to Robinson, the councilor actually has superior credentials in that field. He holds a degree in criminal justice and briefly served as a bailiff in the Marion County court system before becoming a middle school and high school teacher.

Hite began his law enforcement career as an aide to former Baltimore Mayor Donald Schaefer, and was appointed to the Baltimore PD, where – purely on the basis of patronage – he was able to retire after 30 years with the rank of Lt. Colonel. He managed to do all of this without attending a training academy or receiving formal instruction of any kind. When Hite was appointed interim police chief in April 2011, he had to receive a waiver in order to become a certified police officer without attending the Indiana Law Enforcement Academy.

In the productive sector, credentials matter much less than ability and performance. In the parasitic sector, credentials matter a great deal more than competence, but they are not indispensable.  Hite was fortunate enough to find favor with a bureaucracy that isn’t picky about matters of “certification” – and the circumstances that led to his appointment as chief reveal a great deal about the institutional character, such as it is, of the “army” over which he now presides. 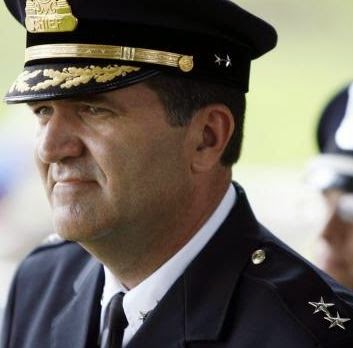 Hite was appointed to replace former Chief Paul Ciesielski, who was forced to resign for misconduct – including what appeared to be deliberate spoliation of blood test evidence -- in the case of Officer David Bisard, who killed a motorcyclist while driving under the influence of alcohol.

Bisard was in pursuit of a narcotics suspect when he plowed his cruiser into two motorcycles, killing Eric Wells and injuring Kurt Weekly and Mary Mills. In addition to having a blood alcohol content more than twice the legal limit, Bisard was typing a personal message into his on-board computer at the time of the crash.

After Bisard was charged with negligent homicide and drunk driving, the trial judge ordered the preservation of his blood sample – which was promptly ruined by being removed from a refrigerated compartment in the property room at police headquarters, and stored at room temperature.

This was not the only “irregularity” involved in this homicide investigation. Bisard couldn’t explain where he had been with the cruiser during a two-hour stretch on the day of the accident. Despite the fact that he had obviously been drinking, Bisard was not examined for evidence of intoxication at the crash site, and he was allowed to remove personal effects, including a black bag, from the cruiser without supervision. Deputy Chief Valerie Cunningham admitted that this may have resulted in the loss of “valuable evidence” from the crime scene.

Bisard was eventually found guilty of nine DUI-related felonies and sentenced to 16 years in prison, with the prospect of parole after serving 78 months behind bars. 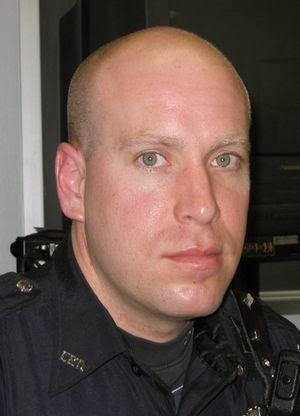 Last month Bisard filed a motion for a new trial, contending that Judge John Surbeck “abused his discretion” by treating “abuse of police power and breech of public trust” as aggravating factors. A stronger case can be made that Bisard’s identity as a police officer was an asset, rather than a liability, given that a Mundane involved in an otherwise identical incident almost certainly would have been charged with murder.

An aggravating factor not considered by Judge Surbeck in Bisard’s trial is the fact that he was driving drunk while pursuing an unarmed individual suspected of a non-violent offense. Terrance Malone, described by the IMPD as 5’2” and 110 pounds, was being sought on suspicion of “felony marijuana possession.” At the time of the pursuit Malone was riding a bicycle and was neither fleeing from the police nor resisting arrest.

“A marijuana warrant isn’t an emergency,” commented deputy prosecutor Mark Hollingsworth during Bisard’s trial.  Yet it was treated as one by the IMPD, which deployed five officers to run down someone suspected of merely possessing a prohibited substance. Bisard, who had consumed a prohibitive amount of a legally permitted intoxicant, volunteered for this engagement in the War on Drugs because he was a K-9 officer and wanted to help his comrades locate any contraband found in Malone’s possession.

Bisard’s indecent eagerness to be part of a trivial drug bust reflects the institutional priorities of the department that employed him at the time. “Forfeiture” proceeds are among the department’s most important revenue streams.

An investigative report published by the Indianapolis Star in November 2010 – just weeks after Bisard killed Wells – found that police agencies in Indiana were “deciding how [confiscated] money is spent, rather than allowing it to go through the normal local government appropriations process.”

This is done despite the fact that the state constitution requires that all proceeds be used to fund the government-operated school system. The Indianapolis-Marion County Metro Drug Task Force, which had employed Bisard, receives at least one million dollars a year directly out of “forfeiture” proceeds.

During the September 17 budget hearing, Indianapolis Public Safety Director Troy Riggs assured the City Council that the police would continue to use money confiscated through “forfeiture” as a revenue source, despite the fact that this is clearly illegal. He also said that he and his comrades are “trying to be at every conference of major cities” in Washington, D.C. and “haunting every homeland security subcommittee” in order to rake in additional federal law enforcement subsidies. None of this would relieve the burden of the local tax victim population, of course; it would merely enhance the financial advantages enjoyed by the privileged people who plunder them.

Indianapolis does suffer from a shockingly high rate of violent crime, and the added indignity of a police department that is predictably useless in protecting persons and property. Local attorney Gary Welsh trenchantly observes that this is not a problem that will be solved by extracting more wealth at gunpoint from the afflicted population.

Noting that Mayor Ballard is simultaneously demanding a huge “public safety” tax increase, while boasting about reductions in the crime rate, Welsh inquires: “If crime is down overall despite the failure to hire more police officers, how will hiring more police officers reduce crime?”

Welsh is probably too astute an observer to fall prey to the notion that police departments exist to protect the public. In Indianapolis, as elsewhere, the police are a paramilitary organization dedicated to serving the plunderbund, and we should thank Chief Hite for describing that relationship with such compelling candor.

Download or listen to the most recent Freedom Zealot Podcast here.

If you can, please donate to help keep Pro Libertate on-line. Thank you so much!

The video you link to at the top of the article is now private.

Scott, it should be public now. Thank you for the heads-up.

An Open Letter to the Chief
Dear Chief Dick Hite,
We have historically been a nation of independent, liberty minded individuals.It seems you need to be reminded of whom it is you are to serve. As an oath-bound civil servant your fist duty is to the constituents/tax payers in your community, You are not the commandant of a private paramilitary army in service of the council. Your comments underscore an atmosphere of hostility towards the civilian population already too prevelant in law-enforcement. The sychophantic hand licking of your masters further demonstrates your unfitness for the position you hold. I will be recommending an imediate dismissal from your current position as well as a psychological evaluation and perhaps a civics and US History class taught by a Constitutional scholar, not a marxist.
Richard R Deaver

IF, IF, he had to "go to battle" he'd have a wet spot on his pants. Or he'd just send his shaved head morons.