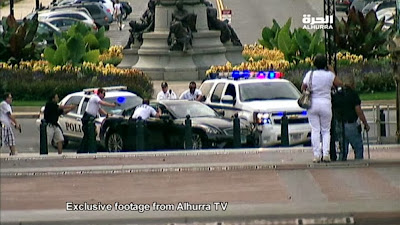 “The wicked flee where none gives pursuit,” the Book of Proverbs instructs us. In similar fashion, an imperial elite that cultivates hostility on a global scale lives under the perpetual and well-deserved expectation of retaliation – which is why it perceives everybody as a potential threat. This is why a confused young mother who makes a traffic error in Washington, D.C. faces summary execution – and the killers will be lauded for their supposed “heroism.”

During the U.S. occupation of Iraq, soldiers  manning traffic checkpoints in Baghdad operated under rules of engagement permitting them to shoot any vehicle whose driver didn’t immediately comply with orders. The predictable result was that scores or hundreds of innocent people – including women, children, Iraqi police officers, and at least one intelligence officer from an allied country – were gunned down by over-anxious soldiers at traffic checkpoints.

As with so many other facets of the world-historic crime called “Operation Iraqi Freedom,” the routine slaughter of innocent Iraqis at traffic checkpoints was documented in war logs made public by the heroic whistleblower then known as Private Bradley Manning. 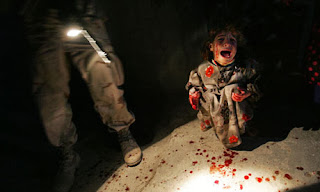 In antiseptic language typical of bureaucratized killing operations, those episodes were called “escalation of force” incidents. An entry for October 26, 2005 describes how “a civilian vehicle approached and ignored shouts[,] vehicle horn[,] and flashed lights. Unit fired one shotgun round as a warning shot. Vehicle ignored warning and continued. Unit fired 13-15 rounds of 7.62 into the vehicle killing 2 children and wounding one child and one female. 2 civ KIA [civilians killed in action], 2 civ WIA [civilians wounded in action]….”

“I’m sure that these soldiers were doing a good job,” insisted an anonymous official with US Central Command following the massacre of ten Iraqis whose van was shelled at a checkpoint near Najaf. “It’s very tragic, but they acted in an appropriate way.” This was “appropriate” because the lives of U.S. soldiers were of immeasurably greater worth than those of the Iraqis whom they were there to “liberate.” Besides, it was irresponsible of Iraqis not to understand, and accommodate, the security concerns of the valiant foreigners who had invaded their country.

“It may be argued that drivers should be more careful to obey troops’ orders, but in the dark civilians can be as jumpy as soldiers,” observed a report in the Guardian of London. “Unlike troops they have no training or prior experience. They may not be sure who the people with flashing lights are on the road ahead.” (Emphasis added.)

It is entirely possible that after Miriam Carey drove her car into a barricade outside the White House that she didn’t immediately identify the armed men who surrounded her as police officers. It is quite likely – and entirely understandable – that her first impulse was to panic and flee. Her reaction was in some ways similar to that of Iraqi civilians who hadn’t been told that anything other than immediate, unquestioning submission to orders issued by foreign occupiers would provoke a fatal response. 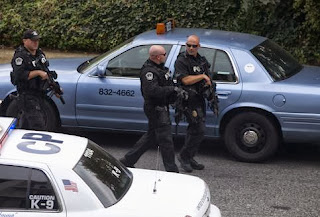 In Iraq, the official doctrine of “force protection” dictated lethal pre-emption of any potential threat. An enhanced version of that doctrine is in effect in the Imperial Capital, which is inhabited by people whose unfathomable corruption is matched by an immeasurably vast sense of entitlement – and coupled with a vague but insistent sense that at some point their crimes will provoke retaliation. Since such people are unburdened by conscience, they see nothing amiss in authorizing summary execution of anybody who might pose some unspecified potential threat to their physical safety.

This mindset has become ubiquitous as police checkpoints have proliferated throughout the Soyuz. 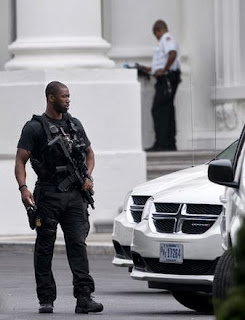 Police in Brunswick County, North Carolina “started unloading” in “super trigger-happy fashion” after an officer rammed his car into a vehicle whose driver was trying to elude a warrantless DWI checkpoint last June. Jared Cleerdin, who was in a car with his wife and young daughter, told a local TV station that all of the officers were “just blasting this car to pieces. It was absolutely terrifying.”

The police directed their gunfire into oncoming traffic, heedless of the possibility that they may kill or injure innocent Mundanes. Cleerdin and his wife found themselves “inches from death,” and their experience was hardly unique.

The actions of the police were “way beyond reckless,” Cleerdin testified. “I couldn’t believe it…. It looked like every officer there did not follow protocol in any way, shape, or form.”

Antonine Graham, who was driving the Lincoln Navigator on that evening, had several narcotics-related offenses on his record and was allegedly carrying marijuana and paraphernalia when he encountered the checkpoint. He and his passenger, Jerry Melvin, were both shot multiple times after a cop rammed their car to force it to stop. For seeking to avoid the warrantless checkpoint, Graham was charged with ten counts of assault with a deadly weapon on a government official and several other offenses.  Because he was in a vehicle driven by Graham, Melvin was initially charged with conspiracy to commit assault with a deadly weapon.

Despite the fact that the behavior of the officers enforcing the checkpoint needlessly endangered innocent people, the Brunswick County district attorney’s office ruled that the shooting rampage was “justified.”
How could it be otherwise? To those who presume to rule us, and their costumed enforcers, we’re all Iraqis now.

Thank you so much!

On behalf of Korrin and our children, I want to express my deep and abiding gratitude to everyone who has made donations here at Pro Libertate. This means more to us than I can adequately express. As a journalist, I'm gratified to know that what I write is of value to you. As a husband and father, I am deeply grateful for your help in providing for my family -- especially in light of the fact that so many of you are in straits similar to our own. Thank you once again, and God bless.

The audio edition of Liberty in Eclipse is now available.

Tune in Saturday nights at 8:00 Mountain Time for Freedom Zealot Radio on the Liberty News Network

That proverb summed up everything.

Heck, I never really saw that proverb for what it really meant.

Thanks for the enlightenment! It all makes sense now.

we are alle heroes!

Well said. Well put. But sorry, it will not be well received. Most people have become sheep and after 20yrs of "COPS" on TV, we have become docile targets for police tyranny.

More than that, the so-called "government shutdown" is nothing more than the Empire placing sanctions on the people of central North America.

The pattern is, the supposedly "elected" officials in the country don't do what the Empire wants. The Empire enforces sanctions against the people to make things painful for them, so that they will contact their representatives and demand that those reps capitulate to the dictates of the Empire.

Thus parks, monuments, sections of ocean, welfare payments, are closed, to cause the public the maximum pain.

Welcome to Iraq, Iran, and Cuba. Enjoy your stay.

I only care if they shoot White humans. As long as they euthanize negro farm animals gone wild, I say "Blaze away!"

Anonymous said...
I only care if they shoot White humans. As long as they euthanize negro farm animals gone wild, I say "Blaze away!"
October 7, 2013 at 10:12 AM

Moron is too generous a term for someone who thinks this way.

"He that would make his own liberty secure, must guard even his enemy from oppression; for if he violates this duty, he establishes a precedent that will reach to himself."
-- Thomas Paine

The very reason Americans at home are being subjected to this sort of brutality today, is that what we exported to the Middle East, is now being imported back into Amerika.

Hmmm? I was always given the impression that Americans were rough, tough, individualists that don't take no crap from nobody. After all, didn't they single-handedly kick that Tojo's and Hitler's ass. Showed the VC who was boss. That Osama guy got his, too! They would never let their own government push them around. Right? Right? Riiight.

Rich:
Those events you refer to were things that were done by Americans in the military who had orders from their government to do them. When it comes to American civilians--they are used to their government giving them orders to sit back, be oppressed, give up freedom, etc.

When Americans are given orders, they obey!