The Pine Bluff PD: From Merely Dysfnctional to Downright Deadly 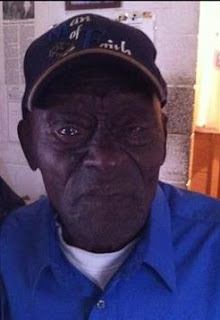 No tactical genius is necessary to bring about a bloodless end to a standoff involving a 107-year-old man armed with a handgun and surrounded by police officers inside an otherwise vacant house. All that is necessary is a willingness on the part of the officers to accept a minimal amount of risk, and a time horizon longer than a half hour. In fact, only someone with a perverse appetite for gratuitous bloodshed could arrange to end that confrontation with the violent death of the centenarian suspect.

As it happens, the valiant men of the Pine Bluff, Arkansas Police Department’s SWAT team were equal to that task. That’s why 107-year-old Monroe Isadore was killed in a torrent of gunfire on the evening of September 7.

“It was a lot,” one witness told KHTV news, referring to the number of shots fired by the SWAT team in the home where Isadore had holed up. “I can’t even count on my hands.” Another witness said that at least thirty rounds had been fired during the fatal fusillade.
Isadore reportedly fired a couple of desultory shots at the SWAT operators who inserted a tear gas grenade into the house, and then a few more after the entry team flung a flash-bang grenade into the bedroom. Pauline Lewis, who owns the home where Isadore was killed, told reporters that the police “didn’t have a choice but to shoot him after they had put teargas in and everything. He refused and he shot first.”
That “choice” was a result of the SWAT team’s preference for escalation, rather than containment.

Isadore allegedly pointed a pistol at Lewis and another housemate after Lewis – who had allowed the old man to live there for a few weeks – suggested that he should find another apartment. By the time police arrived, Lewis and her friend were no longer in danger. This was not a hostage situation, and the 107-year-old suspect was not a threat to engage in a killing spree. There was no reason why the SWAT team couldn’t simply lock down the house, and wait out the suspect – apart from the fact that tactical officers are trained to deal with such situations as military engagements that end when the “enemy” is “taken out.”

SWAT teams attract people with an appetite for kicking ass, preferably in situations involving minimal risk. Where real danger exists – as at Columbine, for example – SWAT operators will be judicious to the point of paralysis, dithering and equivocating until the shooter has sated his depraved appetite and taken his own life. Charging a bedroom occupied by a mentally unbalanced 107-year-old armed with a small-caliber pistol is a task better suited to the skill set and valor of the typical SWAT team.

Long before its SWAT team brought a needlessly bloody end to its standoff with Monroe Isadore, the Pine Bluff PD had displayed a propensity for overkill. For example: In April 2012, Officer Anthony Brown, who was assigned as a school “resource officer” at Jack Robey Junior High School, unleashed a chemical barrage to clear a hallway when students were a bit sluggish in returning to class after lunch.

Three students were sent to the hospital with respiratory problems. The mace assault would have been treated as a terrorist attack had it been committed by a Mundane. Officer Brown was “punished” by being docked eight hours’ pay. Neither Brown nor any of the other three Pine Bluff cops assigned as “school resource officers” had any specialized training for that role. This helps explain why his instinctive response to trivial adolescent defiance was to deploy a chemical weapon.

A few years ago, a Pine Bluff officer moonlighting as a security guard at a local big box retail store attacked and arrested a handicapped shopper named Scott Mouser, then charged him with “obstructing governmental operations” for being insufficiently submissive during the assault. The man had forgotten his cane and provoked the officer’s suspicion by using a shopping cart to assist him while shopping.

In addition to being a danger to the public it supposedly serves, the Pine Bluff PD in recent years has been at war with itself.

Tolstoy famously said that every unhappy family is unhappy in its own way. In a similar vein it could be said that every corrupt and abusive police department – the only variety on offer, as it happens – has its own distinctive form of institutional dysfunction. Police culture encourages a pathological sense of entitlement, and in the case of Pine Bluff that tendency appears to have catalyzed latent ethnic antagonisms.

Apparently, nobody employed by the Pine Bluff PD can be fired without immediately filing a civil rights lawsuit alleging various forms of invidious discrimination. Those lawsuits provide a fascinating composite portrait of an organization that seethes with racial resentments, percolates with petty political intrigues – and offers no evidence of being populated by the kind of judicious, disciplined people capable of waiting out a 107-year-old barricaded suspect.

Pine Bluff is an impoverished town of 47,000 people that punches well above its weight where crime is concerned. About 75 percent of the population is black, and a little more than 21 percent are white. Until the administration of former Chief Brenda M. Jones, those proportions were roughly reversed. Jones was fired earlier this year by newly installed Mayor Debe Hollingsworth, and promptly filed a lawsuit claiming that she was “discriminated against on account of her race and sex, and in retaliation for having opposed discriminatory practices.” 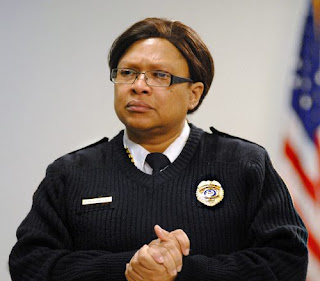 During her nearly three-year tenure as Pine Bluff Police Chief, Jones narrates in her lawsuit, “The percentage of white officers decreased from 75% to 52% … which caused animosity and racial resentment amongst some of the white officers … chiefly amongst them Chris Powell, who served as President of the Police Officers Benevolent Association (PBA).”

Last year, Powell’s union approved a no-confidence vote on Jones, which obviously did nothing to endear him with the chief. Powell also publicly supported the mayoral candidacy of Hollingsworth, who was “one of two white candidates running for mayor, out of a field of approximately nine candidates, the rest of whom were African-American.”

Taking advantage of a crowded field and a divided “African-American” turnout, Hollingsworth was elected with a little less than half of the votes that were cast – and in her first official act as Mayor, she fired Jones. According to the ex-Chief, this was done in the interest of appeasing “many of the white officers employed by the Pine Bluff Police Department, and much to the satisfaction of Chris Powell.”

Powell was also fired earlier this year after an internal investigation concluded that he had sexually harassed and intimated a young female police recruit named Keyonna Penister. Shortly thereafter, Powell – in keeping with local customs – filed a civil rights lawsuit alleging that he was the victim of race and sex discrimination. Powell claims that he was the victim of a racist conspiracy “to violate [his] constitutional rights … including his right to be free from discrimination based upon his sex of male, and race of white.” 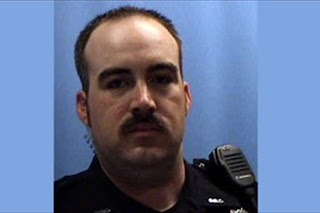 According to Powell’s version of events, Miss Penister falsely accused him of sexual harassment as part of a plot carried out by then-Chief Jones and Assistant Chief Kelvin Sergeant. This was allegedly done “for the sole purpose of punishing him because of his support [for] Mayor Hollingsworth and because he was white.”

Powell asserts that the decision to fire him was “arbitrary and capricious… and a motivating factor was [his] race and gender…..” He also claims to be the victim of disparate treatment, because “Black members of the Pine Bluff Police Department who have committed sexual harassment have not been terminated.” Among them, allegedly, are Ivan Whitfield, an assistant Chief of Police, and Officer Ed Johnson, who “was not terminated” despite supposedly conducting an affair while on the clock. Powell also claims that a black officer named Treadwell “threatened other officers and was not fired,” that Officer Billy Bradley “was arrested and found guilty of DWI, leaving the scene of an accident, and making a false statement and was only suspended; and that Lt. James Golden remains on the payroll despite being found “drinking on duty.”

Pine Bluff Police Chief John Howell, who was fired by then-Mayor Carl Redus in Mach 2010, filed his own lawsuit the day after he lost his job. Howell insists that Redus fired him in a fit of incoherent rage when the Chief expressed concerns about a proposed gun turn-in program in which police would void traffic tickets on behalf of citizens who surrendered their firearms. Powell also claims that Redus improperly intervened in criminal cases, sometimes to the extent of questioning witnesses before allowing them to talk to the police.
Redus claimed that he fired Howell for insubordination. The ex-chief described the termination as an act of age and race discrimination – and said that by choosing Brenda Jones, a 48-year-old black single mother, Redus validated that claim.

Howell’s suit was dismissed by a federal judge in December 2010. While Powell and Jones continue to pursue their lawsuits, the office they once held is occupied by Jeff Hubanks, who was lured out of retirement by Mayor Hollingsworth.


The Mayor introduced Hubanks “to a cheering crowd of police officers, many of whom had waited in the parking lot of the civic center for more than an hour,” reported the Pine Bluff Commercial. Powell – who at the time hadn’t yet been shown the door – exulted that by firing Jones and appointing Hubanks, Mayor Hollingsworth had demonstrated that “the era of tyranny is over.”

Hubanks was warmly embraced by his troops, but the public has legitimate cause for concern: Before retiring as a Lieutenant, Hubanks served as commander of the department’s SWAT team for more than a decade. At least some of the operators who carried out the execution of 107-year-old Monroe Isadore were probably selected and trained by him. Once merely dysfunctional, the Pine Bluff PD has become downright deadly.

If you can, please donate to help keep Pro Libertate on-line. Thanks, and God bless!

the long chain of abuses continues.

where is the straw that will break the camel's back?

What!! We have to give up our weapons in order to reduce a fine? !
"You were driving at a normal safe speed. I'd like some cash but I'll accept that gun too."

"It's a MADHOUSE! A MADHOUSE!"

How about station one ogre near the front door, another near the rear door and a third outside the old man's bedroom window.

Now, provided the snoring heard wasn't coming from one of the cops on duty, the three could be assured that the old man is asleep. They simply enter, walk to the bedroom, remove the weapon, awaken the old-timer and slowly walk him out to one of their vehicles and take him in (or simply take the weapon and let the old man sleep and pick him up the next day).

By why go to all that trouble when you can fire tear gas and grenades into another human's home and then, after you've destroyed the interior of the home, shoot the hell out of it all in order to murder a man?

Obviously it's a lot more enjoyable to kill the old then actually use your brain, if you are a cop.

Get your story straight. The man had a shotgun. The police could have just left him alone and he would have fallen asleep. This is an example of severe misappro;riation of police authority