The Terror Cartel Strikes in Idaho 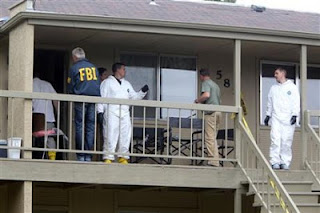 During a May 15 visit to Stockholm, Secretary of State John Kerry warned Syrian ruler Bashar al-Assad that if he doesn’t begin preparations to abdicate his office, “the opposition will be receiving additional support … and unfortunately the violence will not end.”

Under the rhetorical conventions governing the cynical profession called “diplomacy,” Kerry wasn’t allowed to make his threat explicit. Fortunately, Tennessee Republican Senator Bob Corker labors under no such restrictions.
“I do think we’ll be arming the opposition shortly,” Corker told CBS News on May 7, referring to a measure that will be put before the Senate next week.

While alluding to the fact that Washington is already covertly arming the Syrian insurgents, Corker made it clear that the military aid wouldn’t be restricted to rebel groups that have already been housebroken, explaining that “we have to change the equation” because “the moderate opposition groups we support are not as good at fighting” as the more ruthless factions that specialize in terrorizing non-combatants, executing prisoners, and whose leaders mutilate and cannibalize the dead bodies of their enemies.

It is impossible for Washington to provide military or “humanitarian” assistance to the Syrian insurgency without materially aiding hyper-violent factions such as the Jabhat al-Nursah, which is listed on the State Department’s roster of terrorist organizations.

Under federal law, providing material aid of any kind – from money to shaving cream to ammunition – to a listed terrorist group is a felonious offense. A few years ago, the regime sentenced a Long Island cable TV operator named Javed Iqbal to 69 months in prison because his cable system broadcast programs produced by a network owned by Hezbollah.

Iqbal was imprisoned as punishment for allowing words spoken in support of a listed terrorist group to be broadcast through his cable system – yet high-ranking officials in the same regime that sent him to prison are openly discussing their plans to arm Syrian Jihadists. 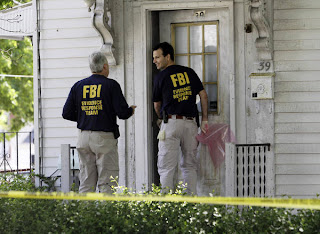 On May 16, the same regime that is providing support to Syrian terrorists conducted a raid in Boise to arrest an Uzbek national named Fazluddin Kurbanov, who has been accused of providing material support to a listed terrorist group called the Islamic Movement of Uzbekistan (IMU). As headline bait, the Feds also charged Kurbanov with possessing components of a “weapon of mass destruction,” which in this case appears to be a homemade hand grenade.

Federal prosecutors, including Wendy Olson, the hyper-ambitious legal commissarina assigned to Idaho, insist that the public was never at danger, because Kurbanov had been under surveillance for a long time, and the threat he posed had been contained. This means we should anticipate the all-but-inevitable disclosure that Kurbanov was being manipulated by an undercover operative working as a “terrorism facilitator” on behalf of the regime. 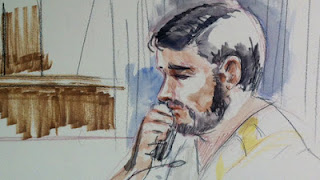 As we should expect, the IMU is a violent group whose objectives are not entirely laudable. This doesn’t make them a threat to our country, however. In fact, their chief grievance is one most Americans would find understandable: They want to overthrow a fetid police state run by a Communist gangster.

A profile of the group published by the Foreign Military Studies Office at Ft. Leavenworth recounts how the IMU grew out of a private security group that was created by Uzbek businessmen in the early 1990s. It was originally a non-ideological, non-sectarian self-defense organization that protected citizens and business owners against criminal syndicates that grew out of the Communist nomenklatura.

By 1991, the group had fallen under the leadership of a young mullah named Tahir Yuldashev, who gave it an explicitly Muslim character and – with the help of a veteran of the Soviet war in Afghanistan – organized it into a private police force. In December of that year, the group occupied the local Communist Party headquarters in Namagan.

Thinking he could intimidate the group into dispersing, Uzbek Communist Party leader Islam Karimov paid a personal visit to Namagan – only to be publicly humiliated by Yuldashev, who refused to back down. This earned the IMU the undying enmity of Karimov, who banned the group and declared war on it when he became the ruler of Uzbekistan following the break-up of the Soviet Union. 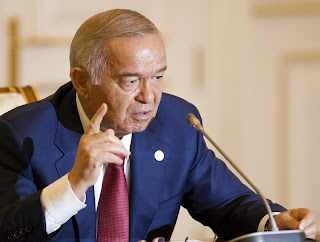 Karimov, a Stalin-grade despot, remains in power today. As one would expect from a product of the Soviet ruling elite, Karimov is sustained in his rule by secret police who were trained by the Soviet KGB. This has made Karimov’s regime a very useful subcontractor for Washington in its war against – well, anybody impudent enough to challenge its claims to unqualified global supremacy. Terrorists willing to serve Washington's interests -- whether they are Syrian insurrectionists or practitioners of state terrorism, like Karimov -- enjoy protection as part of Washington's official terror cartel

The KGB-constructed dungeons in Uzbekistan have been – and, for all we know, continue to be – prime destinations for people abducted by the CIA for the purpose of prolonged detention and torture.

During the reign of Bush the Lesser, Craig Murray, the former British ambassador to Tashkent, exposed his government’s collaboration in the CIA’s torture program in Uzbekistan. This led to Murray losing his job and enduring the kind of focused persecution reserved for public servants who publicly condemn the criminal actions of their employers. 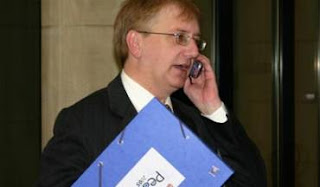 “If you are put into prison in Uzbekistan,” wrote Murray after he was purged by his government, “the chances of coming out again alive are less than even. And most of the prisons are still the old Soviet gulags in the most literal sense.”

A few weeks into his term as British ambassador, Murray attended a show trial of an elderly man who had been tortured into confessing involvement with al-Qaeda, and implicating his nephew as well. This totalitarian auto-da-fe, he recalls, was staged “for the benefit of the American embassy to demonstrate the strength of the U.S.-Uzbek alliance against terrorism.”

To Karimov’s embarrassment, and the discomfiture of his invited guests, the victim refused to follow the script. Summoning the heroic strength of an innocent man with nothing to lose, the frail defendant defiantly told the tribunal: “This is not true. This is not true. They tortured my children in front of me until I signed this. I had never heard of al-Qaeda or Osama bin Laden.”

Karimov and his comrades had hoped to offer a gift to their new patrons in Washington in the form of a broken and contrite “terrorist” whose confession would demonstrate the efficiency of their interrogation program. Instead they had to be content with dragging this pitiful old man outside the courtroom to be shot. 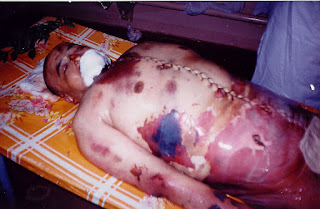 Murray has described the case of a man named Muzafar Avazzov, who was submerged in boiling liquid after being beaten and having his fingernails ripped from his hands by Karimov’s CIA-allied secret police. He was hardly the only detainee who was murdered by being boiled alive.

After learning of these atrocities, Murray compiled a large dossier and expressed his outrage to his superiors – only to be rebuked for being “over-focused on human rights.” This led the ambassador to send a deputy to the CIA station chief to deliver a formal protest. The U.S. functionary deflected criticisms by boasting about the quality of the “intelligence that had been extracted through torture, and by reciting the familiar claim that torture is a trivial concern “in the context of the war on terror.”

Significantly, the U.S. government designated the IMU a terrorist group in 2005 – at the height (or depth) of official cooperation with Karimov’s torture-state, which in that year conducted a bloody operation to suppress dissent that left several hundred people dead.

None of the U.S. officials who collaborated with Karimov’s KGB-trained torturers has been punished. It’s not clear whether that collaboration continues today. Now that the regime in Washington simply assassinates people through drone strikes, it may no longer have use for such crude methods of intelligence collection.

The Islamic Movement of Uzbekistan is a violent and dangerous group, but it has never posed a measurable threat to the safety of Americans. The same is probably true of Fazladdin Kurbanov. However, this is emphatically not true of the regime whose secret police operatives kept Kurbanov under surveillance in his Boise apartment.

Following Kurbanov’s arrest, Boise-area talk radio programs resounded with ritualistic recitals of the prescribed talking points: We must remain “vigilant” and incurably suspicious of our neighbors – especially dusky-skinned people with exotic surnames – because our enemies are implacable, endlessly devious, and incurably determined to dominate us or murder everyone who resists. We don’t yet have reason to believe this description applies to Kurbanov. However, it does make a perfect fit for the government that is prosecuting him for the crime of seeking to undermine a ruler who is a prominent member of Washington's officially sanctioned terror cartel.

Well said. I'm not holding my breath waiting for the latest "revelation" that this individual was not in fact guided by the unseen hand of the FBI. The imperial security organs demand regular blood sacrifice. So if it has to go out and manufacture its victims then so be it.

I'm only surprised the Regime thugs didn't set him up to throw the grenade into a crowd somewhere. And then arrest him. Boston-style.

I read halfway through this and I still have no idea what exactly this is supposed to be about or what the point is. I will not be finishing it. Please learn to write better.

I'll help you with the big words there, anonymous.

To Anonymous - It seems you may suffer from the all too common inability to comprehend intelligent commentary. Just stick to the State-propaganda media outlets.

People these days like to be spoon fed...If they actually have to chew on it they want to spit it out..Thats one of the many reasons why our great country is going down the toilet..

What every American should know is that your government hiding behind the patriot act, can scoop you up declare you a domestic terrorist and ship you off to one these "stan" countries never to be seen or heard from again.

Kerimov may be a despot but UMI is a dangerous narco-terrorist organisation and they want to destroy secular Uzbekistan and brign shreia to make it a second Afhanistan or Iran. So Kerimov has a right to be a despot, you cannot throw flowers to radical Islamist or you cannot persuade them, in Radical Islam there's no democrasy and human rights.