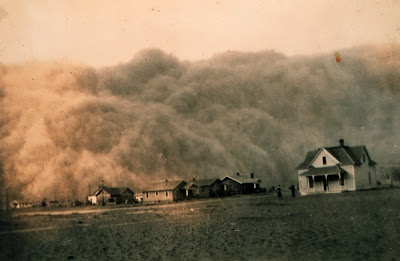 The Last "Worst Hard Time": Rural farms in the Great Plains come under assault by a dust storm. The economic clouds gathering over our heads are pregnant with even greater devastation -- so, hey, how about a nice little musical interlude to cheer us up while the collapse accelerates?

Can be seen dis-int-eg-rating all across the nation!


Because the local sports mogul who owns the football team


Demanded a new stadium, or else he'd up and leave


We formed a sports authority to collect subsidies, 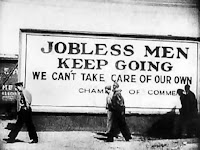 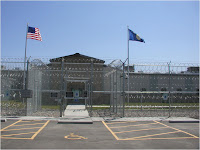 
to boost our sick economy" -- but 'twas an epic fail.


In waltzed a Serbian con-man who said he'd run the place;


For ninety years the Fed has told us debt's as good as cash,


Thanks to the jerks in Washington, the U.S. dollar's trash.


We'll watch our wealth evaporate while grass grows in our streets. (repeat chorus) 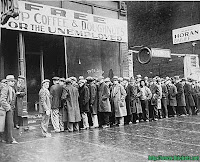 
The Beast from Jekyll Island makes a profit from our woes;


Its assets and expenditures -- secrets it won't disclose.


The Banksters live in luxury while workers drown in Red;


Our kids will live as feudal serfs unless we End the Fed! (repeat chorus)


(My apologies to Robert and Richard Sherman, and anybody who -- like myself -- doesn't really care for show tunes. I had an idea for an original tune, but unfortunately "Dancing in the Ruins" was already taken.)

I had that in rap formation when I was reading, even though I don't do rap, so it was fine. ;)

It took me a second, but if I am correct, I saw that movie as a child years ago. That's not a bad improvisation at all on your part.

One line about The Creature from Jekyll Island reminded me about something that the notable "libertarian" Neal Boortz said about the book. He said that he had built many a bonfire with copies people mailed him. I hope for this materialist of the lowest order that a financial bonfire awaits him.

Let's see the folks at Disney do a feature-length picture complete with cartoon characters based upon that song.

Brother, can ya spare a trillion?
-Mr. Sachs

Please sing this on the radio.

If you can't do that could you sing it on you tube?

Man are times tough. Every one I talk to in my profession, ( forest products industry) is sucking wind. However many of these same people are beginning to wake up to the effect the deceptions, corruption and lies of the Fed gunvernment are having on their bottom line.

And I mean every letter of it!

I heard your radio show last night (or was it the night previous?) where you mentioned Bill Gates among the fine entrepreneur types.

True, in the beginning, but now after he's earned his billions, he's every bit the genuine Leviathan partner - whether the U.S., EU, or Chinese variety - as it makes no difference. Surprising? Nah, it shouldn't be because the reality is that once a person accumulates enough wealth, a number of changes occur, almost without exception from my viewpoint.

First, when ones wealth reaches a certain level the Rockefeller/Bilderburger set probably begins slinking nearby and initiates contacts and so the process of conversion from hardy, independent capitalist entrepreneur to the Rockefeller hybrid is germinated and then cultivated.

Second, it's apparently inevitable that a degree of greed and even a tinge of paranoia must begin to take hold and they become absolutely terrified about losing it. Thus, they readily partner with the real engine behind every central Leviathan's power - a billionaire club of elitists.

You could randomly pick anyone who began as more or less a hardy entrepreneur and becomes a billionaire - Larry Ellison (Oracle), Scott McNealy (Sun), et al, merely two within the technology sector or someone like Ted Turner (CNN, Turner Broadcasting), Oprah Winfrey in the broadcast media sector, Warren Buffet (Berkshire-Hathaway) in the financial sector - and their mindsets all are heavily polluted with and influenced by corporatism. One theme that absolutely predominates that mantra, of course, is to procure profits while socializing costs.

The corruption and attendant greed apparently becomes too great a temptation to overcome, especially when your net worth reaches into the billions.

Given its alluring and deceptive attraction, it really is a scary thought, in my mind at least, to become super-wealthy. To whom much is given, much is required. Becoming giga-wealthy has the potential, nay the probability, of becoming a curse rather than a blessing.

I don't know if this was off-topic or not, but since this post seemed a bit more generic to me, I decided to comment on that segment of your radio show instead.

BTW, that "Merry Depression" sing-along actually maps quite well to that well-known Mary Poppins tune. The song title is a most apropos dichotomy by itself, as is the irony of the tune itself contrasted with the blissful Mary Poppins tune.

I've thought the same thing myself over the years. I can only think of two billionaires that I have any respect for. One is Jim Rogers and the other a person few have heard of- Sir James Goldsmith. Goldsmith used his wealth to fight the idea of Britain belonging to the European Union. The rest of them are rotten to the core. I certainly haven't heard of anyone else.

To that list of respectable billionares I might add Jim,Jack and Arthur Irving. Although not without flaws they seem to be real entrepreneurs who have a genuine concern for the region in which they were born and continue to live and the many thousands of workers they employ. In an era where outsourcing is very common they continue to invest in all of their pulp, paper, lumber, oil, shipbuilding etc... facilities - choosing to grow them in the Maritime provinces of Canada instead of relocating them to say Asia or Central America, for example. The Irving group of companies also treats their employees very well. Above average compensation, benefits and job security in a region with high levels of unemployment and poverty.

One is Jim Rogers

Well, it's obvious he certainly knows about commodities and how to invest money therein, no doubt.

But as to his actual demonstrated character, which has been my point, I'm cynical and skeptical (nothing new for me). I do have a really hard time believing Mr. Rogers doesn't grovel before certain central governments, particularly China's Leviathan, even though he himself is residing in Singapore. I heard him talk about protectionism on a radio show a week or two ago and he's a bona fide cheerleader for so-called "free" trade and railed against any return to protectionism, IIRC, specifically about the U.S. weak imposition of tariffs on imported Chinese-made tires. Yet, European, Chinese, and Japanese Leviathans already practice it liberally, imposing levies and tariffs on certain products produced outside their boundaries and by foreign interests.

Anyway, what most commoners think of as "free" trade - which the statist/corporatist media have inculcated over the years - is really managed (by Leviathan dictates/treaties/subsidies) trade. It's rarely, if ever, a completely voluntary exchange regimen.

Just as we can thank Nixon for the petro-dollar scheme with OPEC after unshackling the dollar from gold in 1971, as Will mentioned on one of his recent radio shows, his historic 1972 China trip set in motion the still ongoing, but now nearly complete, deindustrialization of America by subsidizing American corps. (via USAID and our Ex-Im Bank) to relocate production facilities to the Far East, particularly China.

National leviathans have long had their collective tentacles in each's own respective economy, but only our Leviathan is not so much benevolently involved with our economy, but malevolently. It instead helps to destroy it with excessively burdensome eco-Leninist and other heavily constraining regulations, thus simultaneously, creating incentives to outsource overseas and socialize the costs of doing just that. Ain't it lovely?

Whereas China, Japan, EU, etc. look out for their own first and foremost. But, this has obviously been the long-term plan of elitists in all three spheres (Americas, EU, Far East) for the US, to be forcefully "harmonized" economically, politically and in terms of its laws with its neighbors (for ease of integration) and the rest of the world.

All that said, Mr. Rogers obviously isn't blind, deaf, and dumb, hence he moved to Singapore rather than a city in China proper, but not because of authoritarian concerns (as Singapore itself can be quite authoritarian for the hapless commoners), but because of pollution concerns (yet he's heavily investing in China companies contributing to said pollution....sigh).

After all, are we supposedly to believe he performs much of his lucrative financial machinations in a fanciful "see no evil, hear no evil, speak no evil" environment, like China?

Ergo, in my mind, his character is at least suspect, but yes, I'd tend to agree he's probably one of the least nefarious-minded of the cabal of known billionaires.

Jim Rodgers is not a billionaire. Look at the 2008 Forbes list for proof of this statement.