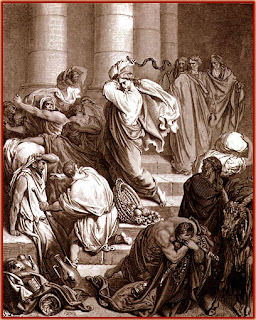 1) The act or process of cleaning, purging, or purifying;

2) A rite or liturgy to cleanse people, cities, or armies that have been defiled through crimes or pestilence.

The end of the Bush Regime a little more than a year from now demands not just a transition, but a lustration. A systematic effort must be undertaken to uproot the thickly planted precedents for executive despotism, and specific policymakers should be subject to civil – where possible, criminal – prosecution for their crimes against the Constitution and specific individuals.

I'm not so naïve as to expect that any serious effort of this kind would occur within the Beltway, even if the Republicans are put to a well-earned rout at the polls this November. Neither branch of the Establishment Party has any interest in reducing the power of the Imperial Executive, as long as each side can count on getting to play with the presidential toys at least some of the time.

Once this is understood, the cravenness of the Democratic congressional majority in dealing with the Bush Junta's relentless assault on the rule of law is entirely understandable.

“In case after case, our political establishment has adopted the `principle' that our most powerful actors are immune from the rule of law,” writes the indispensable Glenn Greenwald. “And they've adopted the enabling supplemental `principle' that any information which our political leaders want to keep suppressed is -- by definition, for that reason alone -- information that is `classified' and should not be disclosed.... Thus, our establishment believes that any information that would shed light on whether our most powerful actors have broken the law is information that shouldn't be disclosed. In those accidental cases when -- via unauthorized leaks -- information is disclosed that demonstrates that crimes have been committed, our establishment bands together to insist that nothing be done, that there is no need to investigate or hold anyone accountable, and that the only real wrongdoing is by those `leakers' who disclosed the lawbreaking.”

“This is the same pattern seen over and over: leakers reveal that Bush broke the law for years by spying on Americans without the warrants required by law, and every investigation -- legislative and judicial -- is successfully blocked, and Congress then moves to legalize the lawbreaking,” Greenwald continues. “The top aide to Bush and Cheney, Lewis Libby, is found unanimously by a 12-person jury to have lied deliberately with the intent of blocking an FBI and Grand Jury investigation ... and is sentenced by a conservative judge to prison, yet is protected from jail time by the President while our media and political establishment cheer almost unanimously.”

Obviously, the bi-partisan Establishment Greenwald describes is not bent beneath the weight of its misgivings about the emergence of a dictatorial executive, and eager to feel the healing, astringent sting of an overdue purge. 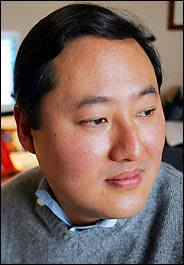 However, there are venues beyond the Beltway in which life can be made very miserable for key architects of the Bush Regime's doctrines of limitless executive power. Perhaps nobody in that cohort had a more important role than John C. Yoo, formerly of the Justice Department's Office of Legal Counsel. Yoo was the author – sometimes uncredited – of most of the important advisory memoranda that set out the regime's official ideology regarding undeclared war, torture, indefinite detention of terrorist suspects, and the unqualified supremacy the president.

Ideally, Yoo would be prosecuted by some appropriate court for his role in abetting the death of tens or hundreds of thousands of innocent people. (And ideally Yoo would share the dock with several people above his pay grade.) But it was his role in facilitating the imprisonment and torture of one man – Jose Padilla – that may land him in court.

With the help of the Yale Law School's National Litigation Project of the Lowenstein Human Rights Clinic, Padilla and his mother, Estela Lebron, have filed suit against Yoo.

The lawsuit contends that Yoo's memos provided the rationale and framework for the illegal, unconstitutional detention of a US citizen for three years and eight months, during which time he was subject to various kinds of physical and psychological torture.

“Defendant John Yoo, along with other senior officials, deliberately removed Mr. Padilla from due process protections traditionally available to US citizens detained by their government and barred all access to the outside world, including access to counsel,” notes the suit. Yoo and his colleagues devised “a systematic program of illegal detention and interrogation, which was specifically designed to inflict, and did inflict, severe physical and mental pain and suffering on Mr. Padilla for the purpose of extracting information from him and/or punishing him without due process of law.”

The object of the “interrogation” procedures used on Padilla – sensory deprivation, sleep disruption, stress positions, death threats, the forcible administration of psychoactive drugs, and prolonged isolation in a medieval-quality cell – was “to destroy Mr. Padilla's ordinary emotional and cognitive functioning in order to extract from him potentially self-incriminating information.” 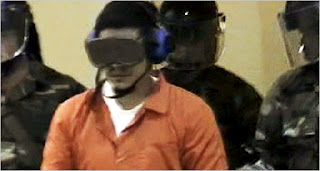 Cruelty with a purpose: Although he was an entirely docile prisoner, Padilla was forced to wear sensory deprivation gear while surrounded by a phalanx of stormtroopers during a medical visit.

Although identified as a collaborator in a “dirty bomb” plot, and designated an “enemy combatant” on that basis, Padilla was never formally charged in connection with that purported conspiracy.

Padilla was eventually convicted of conspiring to “support” terrorism abroad. The key evidence in that trial consisted of transcripts of innocuous conversations in which – according to government “experts” -- Padilla and Muslim acquaintances spoke in “code” about terrorist activities.

The jury was also shown the equivalent of an al-Qaeda membership application Padilla supposedly filled out in Afghanistan in 2000. The five-page form contains several of Padilla's fingerprints. Given Padilla's prolonged, isolated confinement in the hands of military interrogators, it wouldn't be difficult to create reasonable doubt: At any point during Padilla's confinement an interrogator could simply have handed him that document, thereby securing an incriminating set of prints whether or not Padilla had ever seen that form before. We may learn more about this and other matters, since Padilla's conviction is under appeal.

It shouldn't be necessary to do so, but I'll say this anyway: Padilla, a one-time gang-banger and prison convert to radical Islam, is not a sympathetic defendant. He is an American citizen, however, and what was done to him could, in principle, be done to any other American. He served the equivalent of more than three and a half years in prison without being charged of a crime, and was the subject of a deliberate campaign to deprive him of his sanity.

John C. Yoo didn't order this; his role was that of a facilitator, a hireling tasked to devise rationales for tyranny.

His behavior was a bit like that of the Archbishop Canterbury in Henry V. Knowing that Henry lusted for war with France (in keeping with his dying father's advice to “busy giddy minds in foreign quarrels”), Canterbury eagerly seized a spectacularly flimsy pretext and swaddled it in a web of densely woven legalese intended to make it appear that Henry had not only the right but the humanitarian duty to attack France to assert his claim to its throne.

“May I with right and conscience make this claim?” inquired Henry.

“The sin upon my head, dread sovereign!” replied Canterbury, offering the answer required of him.

Yoo's is not the only head on which rests the sin of illegally detaining and torturing Jose Padilla. But Yoo's head is a target of opportunity. 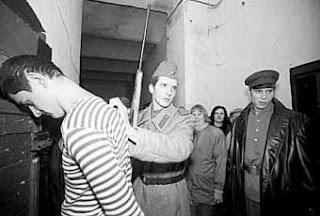 Back to the future? A theatrical re-enactment of executions in the basement dungeons of the KGB's Lubyanka Square Headquarters illustrates what lies just a little further ahead for us -- unless the torture state is dismantled and its architects are punished.

It is difficult, but not impossible, to hold a public official civilly liable for the consequences of policy decisions. But if the lawsuit against Yoo were coupled with a campaign of professional and personal ostracism, it could inflict some genuine and well-deserved misery. And that might be enough to prompt Yoo to discover his conscience – or at least make him want to share the misery by disclosing as-yet concealed facts about the Bush Regime's reign of lawlessness.

Perhaps this is how lustration can begin: We find a particularly ripe pustule, and start to squeeze. Mr. Yoo, who suppurates corrupt self-satisfaction over his evil handiwork, is just begging for that treatment.

Just a quick comment to wish you and your family a happy, healthy and prosperous 2008. Keep up the good work. I (and I am sure many others) will keep reading.

Thank you for all you are doing.

Articles like this are why I read everything Will writes.

I suspect Yoo's contribution to the legal philosophy of compassionate fascism is unlikely to be found a sufficient direct or proximate cause of the victim's injuries to sustain this case. It was Bush's decision to torture, and the torturers themselves who did it. Yoo rises no higher than obedient charlatan - who (as your inspired historical reference points out) only rationalized what his masters already wanted. Plame's attempt to hold the Administration liable for damages was a more plausible (if not successful) run.

I'm afraid the "lustration" of this degenerate Administration is in the hands of the next Attorney General.

May the winter of our frusration be followed by the springtime of their lustration! Trouble is, both parties are in it up to their necks, and the Dems are probably loath to relinquish the new presidential powers that have been magically conjured up by the "Yoohas." (Apologies to Jonathan Swift.) No, unlike the evil Sauron, the Dems will use the Ring to accomplish good! And therefore I expect the Dems to go easy on the perps and instead focus on "healing" instead, making full use of the imperial presidency to do so. Some "healing" life under the presidency of anyone besides Ron Paul will turn out to be! -- it will be more of the last eight years. Sort of like being raped by a stronger cellmate in prison, maybe the American people will eventually get used it.

Lest we forget, Mr. Yoo was also had an instrumental part in creating that Ol' Newspeak winner of the decade...USA PATRIOT ACT.

And the doctrine of Unitary Executive...