The Rot Our Rulers Have Wrought 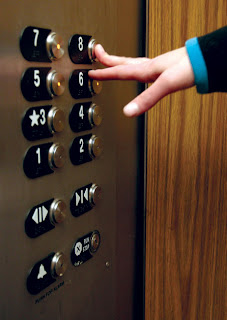 Going down: "It's an express elevator to hell!"


As the elevator doors opened to receive him on the 109th floor, the meek little man -- we'll call him Steve -- was preoccupied with work-related thoughts.


A slightly built man with unfortunate coke bottle glasses and a downright tragic haircut, Steve had little time in his unremarkable life for anything other than work.


The doors closed behind him with the predictable muted ring, and Steve yielded himself to the familiar, comforting insipidity of the Muzak that enveloped him. Scant seconds later, that anesthetizing caress was rudely interrupted by a decidedly unfamiliar jerking sensation and a loud snap.

For the smallest perceptible fraction of an instant, just long enough for Steve to realize what had happened, the elevator car seemed to be suspended -- and then it began a catastrophic uncontrolled plunge from the top of the skyscraper. Steve found himself racing toward the ultimate unwanted invitation at the rate of 9.8 meters per second squared.


As the mortally stricken elevator bucked and shuddered, Steve frantically pounded at the alarm, dimly remembering that there was an attendant on duty who might be able to activate an emergency brake. He had no way of knowing that the uniformed attendant had surrendered himself to slumber, and neither heard the urgent buzzing of the alarm nor saw Steve's horrified face on the closed-circuit TV monitor.


The car continued to accelerate as gravity's pitiless grip tightened on its hapless prize. A scream gathered in Steve's throat and began to tear its way out when suddenly he saw a flash of light to his left.


From that burst of radiance coalesced the oddest sight Steve had beheld -- the "Buddy Smooth Trio," a beatnik ensemble of vocalist, drummer, and upright bass. At this moment of ultimate mortal peril, these heralds from some unseen realm had arrived to comfort and reassure Steve. As his rhythm section laid down a solid groove, and an unseen horn section added some posh accents, Buddy Smooth shared the glad tidings with Steve:


In defiance of reason and the inevitable fate that faculty understood, Steve found himself oddly comforted by the message.


Yeah, I'll be all right, he thought as he involuntarily bobbed to the beat. Something will happen to stop this before it hits the bottom.


That vignette was one of several masterpieces of random, ironic advertising used to promote the Comedy Central cable network about a decade and a half ago. Each variation on the theme -- immediate, non-negotiable doom briefly deferred when the mystical jazz trio materializes -- ended with Penn Gillette's gruff baritone admonishing the audience: "Think positive -- there's always Comedy Central."


This was a brilliant, if ephemeral, bit of marketing. For our present purposes, however, both poor Steve's fate, and the brief, delusional epiphany that comforted him in the seconds prior to his demise, offer a very suitable metaphor for our economy. The elevator is still plunging, and its death-dive is accelerating. The laws that dictate the impending crash are as unalterable as the law of gravity, and the realities against which we will soon collide as remorseless as the ground that greets a runaway elevator. 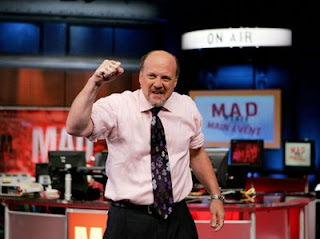 Yet there are some who, heeding the song of a mystical jazz trio only they can hear, are muttering to themselves: "Yeah, it'll be all right. Something will stop this before it hits bottom." This happy illusion has been abetted by the supposed rally of the dollar, which has led some -- including the clinically deranged Jim Cramer -- to say that we've reached the bottom and begun a turn-around. Well, wouldn't it be lovely to think so?


Banks are failing with the hebdomadal consistency of a politician's election-year church attendance. The rot spreading through the banking industry is quickly destroying the foundations of some very large institutions: Merrill Lynch and Wachovia are in severe peril of failure, with write-offs much larger than assets on hand.


The familiar prescription, of course, is more "liquidity" from the Fed, but this is the main vector along which the contagion is spread. Stock values for Fannie Mae and Freddie Mac are collapsing as investors accelerate the inevitable outcome -- a decline in share price to zero. This result will most likely come as the result of a federal bail-out, a prospect clearly anticipated in the rescue bill enacted just weeks ago. 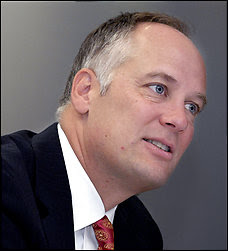 His name is Mudd: Fanne Mae CEO Danniel H. Mudd, who richly deserves to be kissed "upside the cranium with an aluminum baseball bat."


The corporatocracy in charge of Fannie and Freddie are being sheltered from their own criminal incompetence and malignant dishonesty. How criminally incompetent were they, you ask? The Washington Post recently reported that Daniel H. Mudd, the delightfully named CEO of Fannie Mae, boasted in a January 2007 internal memo that expanding the company's portfolio of sub-prime and other, ahem, exotic mortgages was an unqualified success, since it was a way of "optimizing our business."


Sure, Fannie knew those loans had already started to reek, but -- with the same delusional assurance Steve displayed in mid-plunge -- Mudd insisted that those feculent loans would be miraculously sanitized by year's end. And even as the stench of those loans grew unbearable, Fannie continued to underwrite them as a way of gaining market share.


The same conditions prevailed over at Freddie Mac, with CEO Richard Syron learning no later than 2004 that the company's financing of bad loans posed "an enormous financial risk ... to the company and the country."


Weep not for Mudd and his fellow malefactors; they're feeling no pain and, we can assume, based on previous performance, no embarrassment. Meanwhile, new "accountability" standards, largely inspired by the malfeasance of that same politically protected corporate elite, are being passed along to relatively responsible lenders who seek to finance or re-finance homes.


While this is the kind of pain we must expect if anything is to be salvaged from this economy, to be of any real help that pain would have to be distributed more equitably, something that will never happen as long as the criminals running Fannie and Freddie are backstopped by the "full faith and credit" -- I pause here for a moment of hysterical, incredulous laughter -- of the Regime. 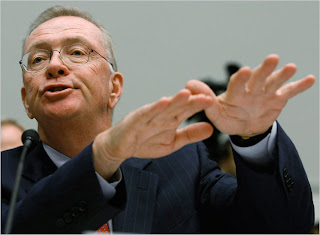 Shareholders in Fannie and Freddie are being annihilated, but the bondholders will do all right. Significantly, one of the chief foreign bondholders is Moscow, which is most likely in the mood not to do us any favors.


At the beginning of the year, Russia had about $100 billion (roughly one-sixth of its gold and forex reserves) invested in Fannie and Freddie paper. Moscow made a tidy $1 billion off that paper during the first half of the year. Ivan hasn't been hurrying lately to buy more, but he hasn't dumped any, either.


If and when Moscow executes the Big Dump, it will likely come for strategic, rather than strictly pecuniary, reasons. It would profit handsomely if Washington nationalizes Fannie and Freddie outright, a move that would have roughly the same effect on our economy that putting a rocket booster on the retreating end of the free-falling elevator would have on poor Steve. The luxury of Moscow's position is that it can either use its financial leverage against us, or simply wait for Washington to finish destroying what remains of our wealth.


Either way, commented deputy finance minister Dmirty Pankin during a recent news conference, the effect on Russia would be "minimal." Either way, the United States, which (as European historian and commentator John Laughland explains) is presently a more socialist system than post-Soviet Russia, is headed for a world-historic crash, and there's not a thing Buddy Smooth, or Ben Bernanke, can do to prevent it.


It's a new and unwelcome variation on an old and familiar story: Washington, blinded by hubris, has been micro-managing a far-flung empire even as our country descends into rot and ruin.


Already, many states are haunted by the ghost-towns of would-be exurbs, and the residential sections of many cities have become blighted with vacant houses and choked with overgrown weeds. Grim vistas of that kind give a true glimpse of our economic condition, a reality check as reliable, and as unwelcome, as the picture of Dorian Gray.

that REM song is coming to mind.

Dorian Gray? now THAT was a good book.

Does anyone else think that the temporary authority given to the government to bail out Freddie, Fannie, and a few fortunate mortgage holders will ever be relinquished? I see it as a stepping stone to a complete socialized/militarized department of housing.

One analogy which comes to mind is the election year of 1980. A killer credit crunch early in the year sent the economy into recession. But a brief recovery that few believed in materialized into the spring of 1981, when both the economy and the stock tumbled into another, deeper down cycle.

The USSA is a planned economy. Presumably the planners can do considerable "steering" of securities markets, at least in the short term.

If Fannie and Freddie get nationalized over the Labor Day weekend (much like busted IndyMac bank opening under FDIC sponsorship the following Monday morning), it will be monster bullish for stocks ... SHORT TERM. Because every epic, landmark government bailout ends up injecting hundreds of billions in fresh liquidity which has to go somewhere.

Pimp my stocks, Hank! Then pimp my house. Thanks in advance, buddy.

"Either way, the United States, which (as European historian and commentator John Laughland explains) is presently a more socialist system than post-Soviet Russia, is headed for a world-historic crash, and there's not a thing Buddy Smooth, or Ben Bernanke, can do to prevent it."

For over 30 years I voted and believed in the system. The problem was that I always seemed to be voting for one who might (but never did) steer us away from the rocks of political failure. Now I cheer for the one who will crash us into the rocks most quickly so we can get to the business of restoring individual liberty.

In many ways, we pushed the USSR into financial insolvency. Only seems appropriate that they are doing it to us now don't you think? Neo-warfare . . .

The national debt belongs to the
fedgov, not the people and not the
States.

The sooner the dollar collapses the
sooner we will be rid of the
spoilers in Washington.

Once the fedgov collapses(with the
dollar,)from whom will the Chinese,
Russians, Brits, Israelis, et al
collect their vig?

Repudiate the debt?
Why bother?

While the rest of this doesn't come as a shock, that Mr. Grigg knows some of the lyrics to a Primus song does. Rock on!

The last person to listen to in this world would be Cramer. For that matter if you're getting any "news" from the boob tube you should know you're being lied to.

Obama the messiah will save us. We won't be China and Israel's concubine anymore and 3 hookers and champagne for everyone. Governments come and go the people remain in fact the everyday people are the only thing I like about this cesspool of corruption, this failed apostasy of small brained kapitalists and their faerytales of classless society where we are all patriotic brothers they can take that folderot and put it where the sun don't shine.