The Way We Are Now: A Brief Photo Essay

I'm grappling with a really nasty strain of the flu today, and will probably be back later with a more substantial offering. Until then, I present the following for discussion: 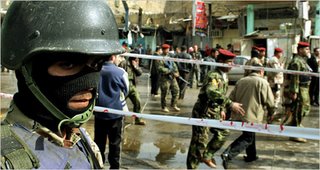 A typical scene from "liberated" Baghdad. 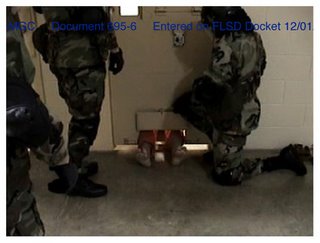 The feet belong to Jose Padilla, the Chicago gang-banger designated an "enemy combatant" and tortured for the better part of his three and a half year detention; the guys in Imperial Stormtrooper drag are getting ready to haul Padilla to the dentist. Bear in mind that the purpose of the detention was not to protect the public, but to force Padilla to become an informant/agent provocateur. 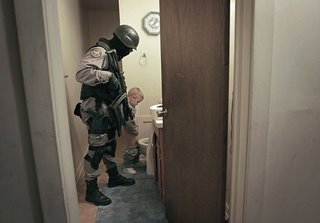 Here's the explanation provided for this award-winning photo captured by a Collegiate journalist:

"A member of the Durham Police Department Selective Enforcement Team escorts a child to use the bathroom after serving a search warrant at a suspected drug house. Working closely with the police department's Gang Units, SET is responsible for making high-risk entries into dwellings to serve search warrants. Gang Unit Two made two controlled buys, or drug purchases, from the home with the help of an informant, giving them probable cause for a search warrant. Even if a raid doesn't turn up anything, presence and show of force sends a hard message to the neighborhood that gang and drug activity will not be tolerated."

(Thanks to Andrew Sullivan and Radley Balko for the photos, and to Clyde Wilson of Chronicles for the borrowed title.)
at 1:22 PM

with the coming collapse of the dollar, and the fact that state sanctioned rights abuses are increasing, everyone should be looking into military surplus ammo for their defense. this is sickening. the wrong people are serving in positions of power, for sure....and they don't want to leave. well, let's do the right thing for one, and pray for them...that'll help both our souls and theirs. there's a solution to all of this, but only God has it. i don't think the answer is what i think we want it to be.......prepare.

why is it that we have to fear those who we've delgated to protect us? why do we have to protect ourselves not from outlaws, but increasingly abusive govt employees? that lady in atlanta did not have to die. those police will probably not be punished. same goes for the cops in NY. the sad thing is that the folks executing these atrocities don't see anything wrong with what they're doing. whatever happened to the days when cops were your friends?

maybe we oughta privatize police like some on Lew's page have suggested (i think it was vin s.). at least they 'might' work for us.

My prayers for your speedy recovery.

It's way too little and way too late, comrade. I do find it somewhat heroic, if beyond belated, these motley “protests” against the various end game processes (latest statist legislation, executive orders, etc.) that we all, even the monkey-brained, NOW obviously see in motion. But why were the early beginning antics and early state-enhancing processes, while still in the birth canal so to speak, not raged against by commoners of the era and aborted while it was more than possible then to do so, before the multiple generations of Americans that have since come upon the scene, each with a more enhanced and molded statist mind?

The symbolic "opposition" of "Ministry of Hope" is fine for some, I reckon, but . Contrary to your site's fascination with 1984, I believe instead that Brave New World better portrays our society today, than does Orwell's 1984. IOW, take the U.S. Constitution for instance. The Constitution doesn't need to be openly opposed by a revolutionary elite, burned so to speak. No, none of that. The commoners or masses simply ignore it, have become ignorant of it, or actually oppose much of it as historically drafted themselves. Little or no coercion from on high required!

Again, to be frank, we’re beyond “protest” and reversing course, IMO. The Gramscian method has already succeeded in saturating the cultural nerve centers of Amerika (sic) and thereby transformed the commoner mind. And one should not be at all surprised by such an outcome after decades of mind manipulation by the key cultural centers (e.g. the churches, Hollyweird, music, entertainment in general, the public skew system, universities, etc.). It’s practically a done deal at this late hour.

The folk have sat on their arse for decades while the gradual and consistent bloating of the fat state was occurring and not much more than a whimper of protest from the days of Wilson and his utopian “make the world safe for democracy” orations, to FDR and his confiscation of gold (among other things), as Will has mentioned, when resisting loudly and overtly then could of made a HUGE difference! Trying to turn the tide decades later is just not going to cut it. I guess one could logically suggest that the Great Depression was purposely orchestrated, set in motion, and timed perfectly to make the populace conveniently subservient, much more so than it would otherwise have been. And so it was...

Anyway, later in the 1960s era, we still see no real resistance by the average commoner. Instead, it seemed that the only ones who ever were protesting, screaming, and whimpering were the rich college kid communists, socialists, and other myriad anti-war “peaceniks,” as if they had a real reason to protest….sigh. Of course, many of those “poor” blokes were merely idealistic and were therefore clueless about the big picture. Nevertheless, they were the loudest, most vociferous, and most boisterous of the protesters, if not the sole protesters much of the time.

There’s a maxim that I long ago slapped together from mere observation and personal experience: “The loudest, the extremely vociferous, the extremely boisterous, and extremely riot-prone folk get the immediate attention and, most significantly, the assuagement of authority figures, even if they are aggregately a minority.” Perhaps, it’s some of that “pressure from above, pressure from below” phenomenon that’s in play that Birchers have spoken of and written about, but, whatever it is, it works!